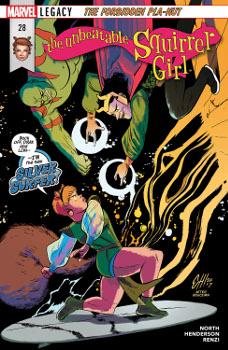 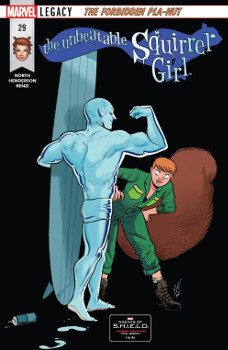 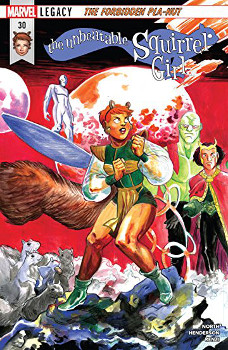 I’m not the biggest Loki fan, but I am a fan of him being a fan of Nancy and him having a giant squirrel head. Definitely Loki in his best form. I also think he works better in books with lots of jokes. Too serious Loki is a drag.

Dormammu is a rather boring villain. I like how Doreen thought to ask him more about his powers and then figured out a weakness. Yes, send the squirrels of vengeance on a mission and then let their souls go to a better domain. Doreen just won’t be able to use that trick again.

I appreciate the tiny text at the bottom pointing out all of Loki’s lies. Like his claim that he cannot magic them to Nancy and Tippy-Toe and that they must take a spaceship.

There was a few weird art things I noticed. When they crash land on planet, Doreen appears to be holding Mew and Nancy calls for her. However, you don’t see the cat in any other panels. And when they’re in Dormammu’s layer, Doreen’s legs are colored in as if she’s wearing pants. Which I think would’ve been a better costume choice, even if I do understand the space opera throwbacks Henderson was referencing.

The grifting of the grifters was pretty great. I hope the real Silver Surfer appeared due to tracking down the imposters. The grifters kind of reminded me of if Ferengis got into surfer culture. Kind of like when Quark wore that Hawaiian shirt in Deep Space Nine‘s “Let He Who is Without Sin.”

Henderson’s art was top-notch in this. She was drawing so many different characters from the Marvel universe, but always making sure to make them distinct people and give them personalities. There are just a lot of fun design layouts inside panels with different aspects of space as well.

No one is surprised that the portrayal of Commander Sootori, the cat lady, is my favorite. Excellent hairless cat with more human expressions. (Side note: I see we didn’t forget to draw Mew this issue.)

The story itself seems a little much. There’s a lot of moving pieces, and while consequences are a thing, I’m not sure we needed a galactic war to take care of Surfer Ferengis, which is now how I think of them.

For the shortening of the story, I’m glad that Loki’s ‘bring all the heroes here’ spell only lasted so long.

It’s great how there’s no explanation to how Squirrel Girl, Nancy, Tippy-Toe, and Sootori could just hang out on Silver Surfer’s board, no matter where it was in space, including going through a planet’s atmosphere. Comic science!

An enjoyable The Unbeatable Squirrel Girl comic always makes me laugh a couple times, and North and Henderson have succeeded in that once again.

The gag with Nancy and the spaceship bathrooms was hilarious. North is not wrong that no one ever deals with the bathroom situation in space. I mean, what did they do on the Enterprise? I do not like the idea that they just pooped in their spacesuits and were self-cleaned. The noises and the faces would be too much.

Tippy and then Nancy as a Silver Surfer was great also. I liked how the cosmic force built onto their original personalities. Tippy wasn’t some kind of great wise god; she was still powered by a squirrel brain. And Nancy tapped into her rage and the possibility that she could do anything.

Though I do have to say that Doreen was a little hypocritical about punching. She punches a lot of people. And yes, okay, Silver Surfer Nancy’s punches would’ve killed the surfer bros.

In general, this story wasn’t for me. I wasn’t extremely amused by the surfer bros, and I didn’t care what happened to them. Nancy could’ve killed them, and I would’ve shrugged my shoulders.

Of course, Doreen solved all the alien races’ long held grudges and fights against each other. That’s how she works. The power of empathy to the rescue. Which has to be some kind of cosmic power unto itself. Perhaps this is why she’s the most powerful superhero around.

As Nancy, Doreen, and Tippy rushed out the door for their next adventure when back on Earth, I think Mew was happy to be left behind this time. Though they did seem to forget she was taken to the planet of squirrels (again).