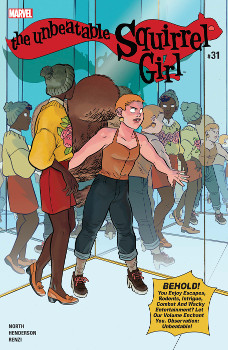 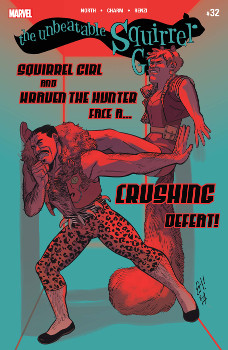 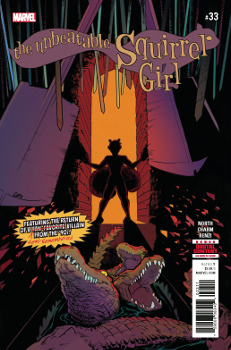 Goddammit, this issue made me cry. I knew I was going to be sad about Henderson leaving the book, but this story packed a full punch in the world and lifetime of Nancy and Doreen. And their magic love!

This book was so queer. I mean, I love Nancy and Doreen as the very best of friends and their incredible female friendship. However, I wanted the love aspect for them, and I wished it had been more explicit. I think it was there — and not just queer-baiting — and there were probably some issues with Marvel and “what can be canon” especially since this book and the new animated TV Squirrel Girl’s been getting a higher profile and when they start caring.

I loved the timey-whimey nature of this. The jokes with Tony and about him were great. Loved the note about them spending a lifetime’s worth of money in one weekend, and then Tony saying he’d done the same thing.

Henderson’s art of Doreen and Nancy aging was just beautiful. I appreciated that they both aged as a similar rate instead of Doreen aging more slowly than Nancy. The dress Nancy gets is gorgeous.

Of course, they dedicated their lives to keep everyone safe. That’s what they do. No stone left unturned, or cat went unsaved. Though of course, Doreen left NYC a message and then all the people started doing wacky things that put themselves into danger. Nice little comic book bit.

I also appreciated that North left Doreen and Nancy stuck until the very end. We thought maybe there was an end, and in many ways, the erasure of their memories made it an ending.

Let me go cry some more.

Charm’s art is an excellent addition to this book if we aren’t going to have Henderson anymore. His style is similar enough, and it follows with the current cartoons they are putting out with Squirrel Girl in them. Doreen is as cute as she’s always is. I particularly love her spiky hair.

Kraven’s streetwear is also my favorite. I love how much it harkens back to his costume, but puts a modern twist to it. Though I wish the others had just as exciting street clothing, even if Brain Drain is ridiculous.

It’s pretty much the best to hear Kraven talk about how he already knew that Doreen was Squirrel Girl and how he found out her secret identity, but would always keep it to himself. It’s good when we give all the characters layers. Their little conversation about their mutual respect and how they like to hang out together was pretty great.

Doreen finding her passion for teaching kids about computer science was fun too. I hope we see more of this. Though I think it’d be very tough to teach and superhero, given how demanding teacher’s schedules are.

This story felt a little formulaic for Squirrel Girl. Don’t get me wrong, we learned about a few unknown powers from both Doreen and Tomas — the power of a squirrel’s jaw is mighty — but the rooms themselves weren’t as impressive as expected.

If this was more of a setup for the next part with Doreen having to deal with the NYPD wanting to arrest Kraven and her status as a hero, then it will be worth it. But Mojo II. He was just as boring as I imagine Mojo was in the ’90s. Even with the jokes about outdated technology and cat videos on smartphones.

But of course, they all end up in jail. Not that any prison will be able to keep in someone who can chew through steel.

Mary and her bomb-making self are slowly becoming one of my favorites. I’m not surprised about the North’s footnote, given for all the chemists I know, it was either drugs or bombs. That’s their reason why.