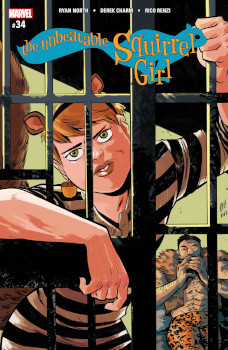 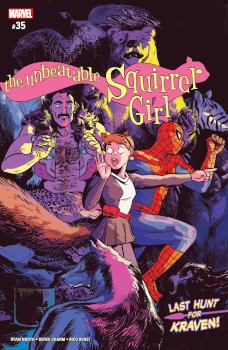 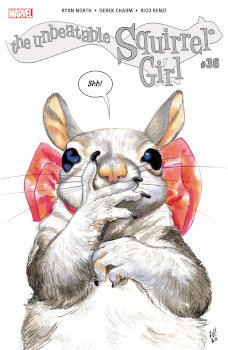 Usually, North’s charming writing makes forgive when he’s too verbose. However, this one was too much. Too many words on the page and it got testy. I’m currently watching a lawyer show while writing this, and I love She-Hulk, so the court isn’t the problem. I’m not a fan of writers overly impressed with themselves, especially how amused North found himself while writing Courtney Alaska, all the lawyer jargon, and the court room situation.

Charm’s Squirrel Girl depiction is becoming more unique with each issue. Post-Henderson, I was worried that Doreen would get too conventionally attractive, and in those first issues, in many ways, Charm’s art was. Here, however, particularly as we see Doreen taking the stand and having many emotions about testifying in court, Charm highlights her face and her smaller movements.

I like that North wants to address what restorative justice is here and how people can change. However, I’m not sure this book has enough nuance in it to tackle Kraven and law enforcement and Spider-Man. Yes, you can argue that Doreen making friends and convincing villains not to do crime — when she could just kick their butts — makes restorative justice at the heart of this book. But because the villains she’s stopping are incredibly super-powered, even among villains, Doreen has to have other options. There isn’t a jail that could hold Thanos.

I can understand why Kraven got frustrated. Why he broke out of prison, and why he’s ready to fight Spider-Man.

Also, there’s been too little Nancy in these last several issues.

Friendship. I’m not going to lie, there was a little tear here from me when Doreen said goodbye to Kraven. Even if I still don’t think the book hit enough on restorative justice, even if it tried to cope with reforming a villain into a decent guy.

Spider-Man is never my favorite character. I know Marvel’s single issue sales and being able to sell a Spider-Man book for $10 an issue speaks to how, for some people, they love him. (Also, all those movies, but I’d much rather see a Squirrel Girl feature film.)

Not that I didn’t think she couldn’t escape, it was surprising that Doreen got webbed. I did enjoy that Charm made it wrap around her tail like she was dressing up as a mummy for Halloween.

The ending joke was the exact kind of corny that fills this book.

This issue was utterly charming, and it reminded me of everything I love about The Unbeatable Squirrel Girl under North’s authorship. The story of Ms. Chloe, the ghost librarian, who is upset that her library was torn down and a punk rock club put in, was hilarious. Especially as she goes about forcing silence in all of New York City.

The art layouts were smart. Charm’s and Lanham’s work to display sound was delightful and perfect. McGrane’s comic books showing Doreen’s plans to stop Ms. Chloe were cute as heck.

Though I do wonder how they stopped all noise in New York City, like right now, I’m sitting in my house — and while no humans are talking — I can hear my cat’s water fountain, the heating system, the buzz of lights, especially the grow lamp with a built-in fan, an airplane overhead, and the occasional car driving by in slow Sunday traffic.

The gag of Ms. Chloe being able to toss all the superheroes across the city was cute. I also enjoyed reading all the book spines and library sections labels. More books about librarians loving books!