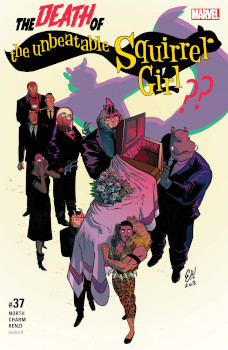 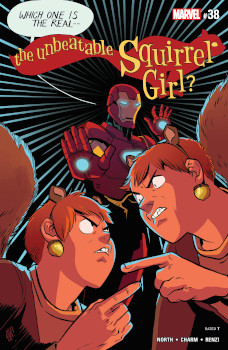 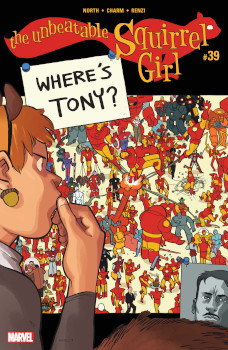 This issue had me until the very end. Then it fell flat on its face with the reveal of a Skrull. See me mega groan. At least Charm can draw faces, which is very important if you are going to draw Skrulls and have some characters be shapeshifters. (If you’ve only encountered Skrulls in the MCU movies, specifically Captain Marvel, they are much eviler and like the Kree claim in the comics.)

Doreen and Nancy dressing up like fish ladies to go undercover to figure out who impersonated Doreen — and who actually died — was ridiculous, like this book. Though also where was Kraven? And wouldn’t it have been suspicious if Nancy hadn’t shown up at her best friend’s funeral? And, if I remember right, Skrulls do revert to their Skrull form when they die. Which still doesn’t solve who was in the coffin!

The Black Widow, Hawkeye, and Captain America scene where Natasha goes off about the superiority of wearing black was hilarious. She did forget to mention black and bloodstains.

X-23 and Jonathan, the real mammal wolverine, are perfect. That’s the comic book spin-off I want to read. Also, no one is surprised Doreen is the sole purchaser of Deadpool’s trading cards.

What I also don’t understand is why the Skrull would be doing good? I hope this means North will give us something new with Skrulls.

What I wanted was something new with the Skrulls, and this is all the same that we’ve seen before. Tony is the Voluble Avenger. While I found all the back-and-forth with Tony to be clever, it seemed very obvious he was a Skrull after that phone call. Yes, even without the secret phrase to prove he wasn’t.

The team figuring out each other weren’t Skrulls was cute. I hope someday we find out everything about future Nancy and Doreen (and their love for each other)!

Charm’s Tony is the perfect cartoon, yet Robert Downey Jr. version of the character. He’s stripped down to his essentials and molded into the Unbeatable Squirrel Girl style. You’d still recognize him as Tony anywhere.

Tony being so happy that Doreen was still alive was sweet. But also, I don’t know why we had to break all the windows.

Doreen just ripped a solid wood fancy desk in half.

The jokes and TIL facts were on-point this issue. This is the first time in a while I’ve laughed this much while reading The Unbeatable Squirrel Girl. Also, it seems like we’re doing something besides a Skrull invasion despite the “and the whole planet will die” warning by this Skrull young woman.

I liked how this Skrull seems to be around the same age, or maybe younger than Doreen and company. It fits for the book much better than fully grown Skrulls.

Charm’s layouts established a strong flow throughout the book. This is the sharpest point-of-view from him yet, and it added a ton to the story itself. The fight/falling scene from Tony’s tower and the hacking montage felt like integrated pieces of the story, making the layout choices stand out here.

The Skrull’s design is also fun. She’s kind of mod, but bright and unique among Skrulls. You can see how she might stand out. I loved that Tony’s underwater prison (that was her hand reshaped) had rounded corners. It felt different.

Of course, I loved the Star Trek joke and Nancy talking a computer to death like Captain Kirk. The computer science jokes, and the facts about saltwater and fish pee, perfect. Doreen’s run-through of advice she’d get from all her friends was fun.