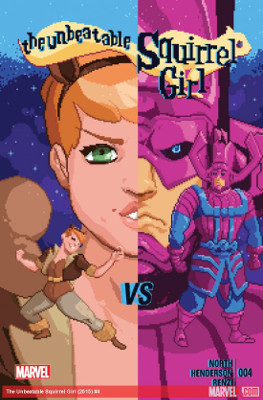 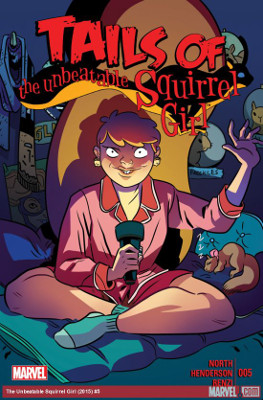 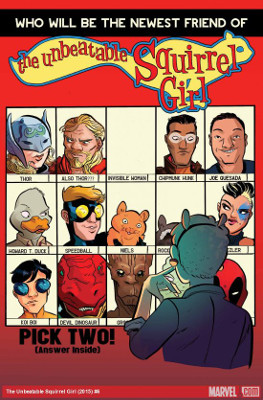 OMG this book is hilarious. And those who doubted that Squirrel Girl could stand on her own against Galactus? Poohey!

My favorite part was definitely Doreen and Galactus getting in an argument about gender neutral pronouns. “They” might be a little clumsy, but it’s what we have.

My second favorite part was when Doreen repeated everything Tippy-Toe said until Galactus pointed out that he could understand her. Best. His identification with the squirrels being trapped in a place where no one understood them except Doreen was pretty hilarious. (Though technically everyone can understand Galactus, even if he feels alone.)

The computer interface was cheeky, but not any cheekier than anything else in this book. Loved that Doreen found an uninhabited planet covered in nuts for Galactus to devour instead. (Also, it would be way more complex to find another planet for Galactus as destroying a planet does a lot to the solar system that planet is in. But since this is a comic about a superhero who talks to squirrels and has squirrel powers, I guess we can ignore science for a moment.) Tippy-Toe not wanting to destroy the nut planet was cute too.

I hope there is much cosplay of Iron Man Squirrel Girl and Tippy-Toe.

Nancy putting two-and-two together about Doreen being Squirrel Girl was perfect. As she noted, it’s not like Doreen’s super stealthy anyway.

Not sure I liked this issue as much as the other ones. While it was ambitious to tell other types of stories — and play around with a lot of styles we’ve seen in the past — I’m not sure if it was my thing. Granted, this book is still better than 95% of other books out there.

I did find the comments about laundry and Venom pretty cute though. And like something perhaps the original Spider-Man comic should’ve said.

Loved seeing Nancy shocked all them into silence when Squirrel Girl shows up and greets her. Then when they walk off together. Stealthy.

Nancy remains the very best. I love how she’s just like “we know who you are!” to Koi Boi and Chipmunk Hunk. She’s so very right that domino masks hide nothing, and Doreen really doesn’t even try anything besides putting on her custom and hiding her tail when she’s in school.

Oh the squirrel suit. I’m glad it was pointed out that you’re punching the squirrels too, and then Nancy figuring out that the squirrels move away. Definitely stops the plans for the Unstoppable Army of Squirrel Scouts. So sad.

Once again, Doreen saves the day through friendship. This is really the best book, and I’m glad to see that North’s keeping to this theme.

Adore that Chipmunk Hunk, aka Tomas, was going to tell Doreen that he knew she was Squirrel Girl and share about himself.

Love Nancy feeling like she’s the only one without powers. Oh, Nancy, you are 200 times better than Xander! But then that Doreen takes her to the zoo to see if any of the animals will talk to her. The scene with the monkeys was funny as yes, I imagine zookeepers see a lot of people trying to talk to them and assuming monkeys know English.