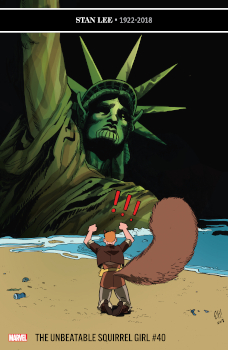 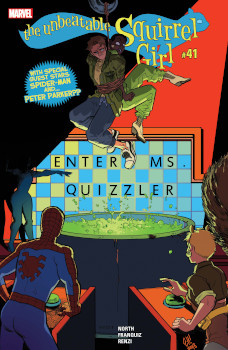 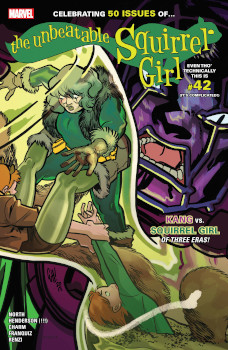 While I liked that Gillian wasn’t here to destroy Earth, but instead, she came as an immigrant running from being conscripted as a soldier in the Skrull army, the plot was too much in the Skrull pretends to be another person vein. Sure, Gillian may not know Squirrel Girl and be shy around humans, due to how they usually act about Skrulls. However, Doreen would’ve helped her from the very beginning.

Tony was the perfect character to argue from an anti-immigration and ‘slippery slope’ point-of-view because Tony Stark would be a conservative. He’s too rich not to be. Though I never doubted that Doreen would prevent him from sending Gillian back to the Skrulls.

I’m not sure North’s metaphors about how Skrulls are taught they’re the very best, but their homeworld is a wreck, works here. It’s not strong enough. I just listened to an episode of the Bad with Money podcast where the host Gabby Dunn spoke with a British woman living in an impoverished area of Colombia, and she said the biggest cultural shock to her was Colombia’s tent cities. When Dunn pointed out that there are substantial tent cities in Los Angeles (where Dunn lives), the guest was shocked. She’d assumed that would never happen in America, the same they don’t have tent cities in the UK due to social services. I guess my feeling is North attempting to connect this disconnect to Gillian’s story didn’t quite work in the same fashion. Maybe he should’ve gotten more explicit and just had a “Keep Skrull Great” sign.

I’m sure Gillian and Tara Tam will be the best of girlfriends who hold hands, look at dinosaurs, and kiss.

The last page though — that page was worth all the stars I gave this issue. Loved Doreen saying, “you’re never alone,” and the welcome to earth kit.

The art was cute, and this is a fun story about Ms. Quizzler. North probably did the best he could, given this issue was a tie-in story to a Spider-Man plot. I did not read the Spider-Man issues, which meant I found the whole Peter Parker and Spider-Man splitting bit maybe more of a one-note gag.

Though Nancy pointing out that she’d have to have a bit less melanin if she was Squirrel Girl was on-point. I also thought it was the best that Nancy would be smarter and less panicking in a bad situation than a powerless Peter.

Not sure about the inclusion of (She-)Hulk and Thor here. They didn’t really add much. Except that Jen is brilliant, and apparently, this Thor is not smart. I guess he’s gone full MCU in origin, instead of his secret identity as a doctor. Though I will be forever annoyed by his Norse lingo in comics. Thank the gods Chris Hemsworth wasn’t asked to speak like that in the movies.

I didn’t get any of the riddles, except the obvious ones about Nancy and Peter, but that’s okay as I don’t think you were really supposed to. The bit about Peter’s teacher out on the lawn yelling for him was great, and how Doreen figured out Nancy was the other hostage.

Of course, I adored this issue. What’s not to love about Kang trying to destroy three different iterations of Doreen (at different ages), and then all three of them teaming up to take him down. Of course, then Kang’s older self was pretty funny too.

The art was top-notch from the entire team, and their styles blended in a lovely manner, capturing everything unique about Squirrel Girl. I particularly enjoyed Kang’s various upset faces. You’d think he’d learn to avoid the person who will ultimately kill him, then maybe he’ll just die of old age or something.

The fact that Brain Drain randomly fixed a wall because its integrity was low, due to Kang’s meddling, and that’s why it didn’t fall on older Doreen was hilarious. I love that he wanted to know about philosophy in the future from Kang.

Of course, I adored Henderson’s young Doreen and Monkey Joe. (The way that the other Doreens treated Monkey Joe makes me think he’s dead. It’s also possible I’m just sensitive to this issue since we put one of my cats, Winston, down last week.) I do like how much North has Monkey Joe being her mentor.

Charm’s art where 20-something Doreen wakes up and then yells for Nancy, scaring Tippy Toe, was the very best. I love Tippy Toe’s adorable little sleep mask. It’s so pink and precious.

I also love the acorn necklaces. I assume this book is confirming more and more that Nancy and Doreen are a couple. They are holding hands at the end, and then older Doreen changes the entire timeline to make sure Nancy stays alive (and also Tippy Toe doesn’t become a brain in a jar, and that whole dystopia stops). Side effects for Nancy’s life!

And yes, Doreen seems to be running the Avengers out of the Avengers Tower, which totally means she’s Tony’s heir.