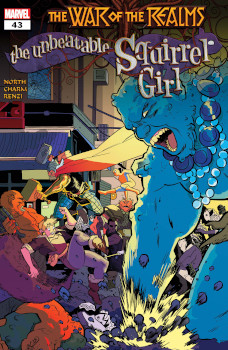 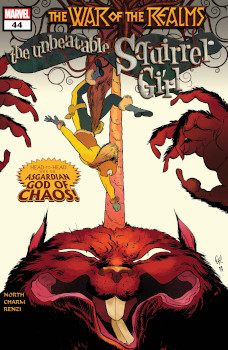 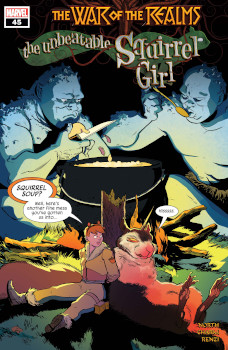 Oof, I hate a crossover event, and I hate that The Unbeatable Squirrel Girl ends on this arc note. It seems like an odd note or last attempt for Marvel editorial to make single issue sales go higher.

Charm’s art is a ton of fun here. Loki’s jokes about Doreen’s shorts and the concern from her parents about her ill-suited to winter clothing was cute. However, not sure what I think about Allene becoming super cute. Like Doreen and Allene are supposed to be identical clones, and while they look related, they do not — especially in the panel where Doreen says, “Love the new hair.” — look identical.

I guess if we’re going to have a crossover, North did the best to integrate this into Squirrel Girl world. Loki has been in the book various times, and there’s an excellent callback to Cat Thor. Plus, his love of Nancy.

No doubt, this is the battle that they must win to stop the dystopia we saw in the last issue with older Doreen and how determined she was to fix that and make sure Nancy stayed alive.

I found it fucking adorable that Maureen makes all of Doreen’s costumes and clothing. It does explain how Doreen finds pants that fit her tail. The snow costume was delightful, and I loved how much more it made her look like a Squirrel. Maybe a little on the nose, but hey, you got to cover up in the cold.

Doreen having to take on Frost Giants felt right, but of course, Ratatoskr shows up.

Wouldn’t those town’s people notice that while Doreen was dressed for the weather, Ratatoskr was certainly not. I’m surprised this did not come up when the town’s people figure out something’s up with them.

Only in Squirrel Girl would we have two Frost Giants in love. This is the kind of content I’ve come to expect from my funny books.

I did laugh several times while reading this book — especially when “Rachel” introduces them to the town’s people, and then later, Doreen figures out what a dowager means. Plus, who doesn’t love a makeover scene, which is basically what happens when Ratatoskr figures out what her human form. She was never going to blend in.

Even if this is a crossover, North is doing his greatest to take control of the narrative and make this still a Squirrel Girl comic. Even if I miss Nancy, Tippy Toe, and the rest of the gang.

This issue was a bit too cheeky for me. Sometimes North gets too cute, particularly the Robert Frost poem and the last panel with Squirrel Girl. Yeah, maybe new people are reading for The War of the Realms tie-in; however, if you are at issue #45 of Squirrel Girl, you are probably pretty bought into picking up the next issue and finishing this series.

I appreciated that North left Ratatoskr cynical about how the heroes would lose Earth to the Nine Realms. While the Frost Giants that she mind controls serve her, they aren’t hers to take over the world or any other nonsense. She’s just biding her time, playing games while the world burns around her.

Both Doreen and Ratatoskr are pretty lonely without the other. Every squirrel wants to be Doreen’s friend, eventually, even trickster gods.

I’m rather hoping this will wrap up the next issue so we can spend those final Squirrel Girl issues with the gang we know and love.