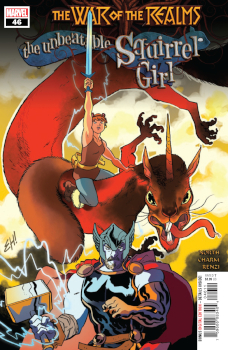 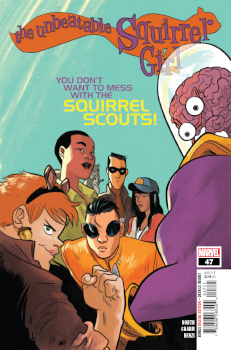 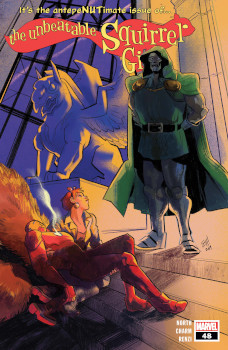 And that was a true Squirrel Girl ending to saving all of North America in the War of the Realms.

I loved Doreen taking a lesson from Canadian history and how Alberta kept out rats. (I live in a port town where rats do not die in our winters, and I’ve had my share of rat battles over my garden.) Plus, it had a nice ‘save the whales’ message. Of course, Doreen has always wanted to save the whales.

The combined efforts of Ratatoskr, Doreen, and the whales themselves were pretty awesome. Ratatoskr was also the cutest whale when morphed into that shape. Always the cutest on all of these pages. I don’t imagine though that whale pods get a lot of random new members.

It was a cute gag to have Doreen’s tail get injured and bandaged up. Same with the gag of Rachel’s arms becoming Locke’s book. Who doesn’t love all the Frost Giants getting riled up about their unfair treatment — it’s so true that most of North America, not inhabitable for Frost Giants — and ready to overthrow their king to install a democracy? Brilliant.

Though could the Frost Giants perhaps helped reverse the climate emergency before they left?

Nancy and her Cat Thor t-shirt at the end combined with her and Doreen chilling on the couch and Mew and Tippy-Toe cuddled together, just make my heart so happy. Doreen and Nancy are definitely dating.

Where is Brian? I had, for a moment, wondered if Melissa had tried to turn him to the dark side. He does have a lot of existential angst. Melissa knows better than to try to disrupt the powers of friendship.

This villain lineup is all the ones that Doreen’s fought who she didn’t become friends with or find another solution to end the crime happening. I do hope we get Kraven before the end of the series.

Tippy-Toe sure is talkative in this issue. She has a lot more dialog than in other issues. Of course, Doreen has taught everyone on her team how to speak squirrel, which I guess means Tippy-Toe would have even more people to talk to and be more chatty in general.

The Leader jokes were pretty good. They balanced out how much I did not like Melissa’s talk. Though North gave a great parody of a tech leader trying to tell everyone how their terrible product will change the world. (When actually they’re creating the Borg or empowering ICE.)

While I understand the basics of photo spycraft, I’m not sure this explanation helped me better understand it. Usually, North’s been great at breaking down these concepts for non-computer scientists.

The moment between Nancy and Doreen, when Doreen finds out that her secret identity has been revealed, filled my soul with squishiness. I loved this for the two of them. Also, more fodder for my belief that they are queer. This is the talk your partner gives you. North’s writing and Charm’s art were perfection here. How the panels progress to show Doreen crying was so moving.

After the D-villains have attacked the team, the B-villains will come as the second wave, and that’s dangerous.

Putting a lamp on the fact that this issue was very text-heavy did not work for me. Okay, yes, I realize that unlike a lot of other readers, I have read all of North’s run on Squirrel Girl. I don’t remember it all crystal clear; however, I don’t need a rundown of all the villains and how Doreen and company took them down previously. It took up a lot of exposition. And I don’t mean the Deadpool Trading Cards.

Doreen saying she’s Mew’s “co-parent” is just another signal that Nancy and Doreen are dating. I know, you can share a pet platonically, but all these pieces are adding up. I hope by issue #50, we get confirmation of their romantic relationship.

At the beginning of Squirrel Girl, I was jazzed to see a great female friendship. However, by this point, Doreen and Nancy have so many other friends — including Mary and Tippy-Toe — that I’m so on board with moving their relationship into the romance territory.

I did love the real-life story of Archie, and how North put him in the comic book. The real squirrel may never know, but I will miss this book and its squirrel facts. It was perfect that Tippy-Toe couldn’t disarm the bomb because squirrels cannot distinguish red and green from each other. And I adored that before they went to confront Melissa and her villain friends that they made sure Mew had neighbors to watch and take care of her.

Okay, Melissa disabled Tony’s Avengers emergency signal. However, since most all the heroes live in NYC, it seems like there are high chances of other heroes seeing the battle in Central Park. I mean, there are smartphones, and Central Park is always full of people.

I do wish that Doreen had other female superhero friends. It was noticeable that Nancy and Mary were immediately in danger and grabbed by Fin Fang Foom. Then it was just Doreen and the guys. And, on top of that, Melissa is the only woman in the group of male villains who back her up.

(Okay, Brian is also damseled as he was captured and his body changed by Melissa. It was great that she couldn’t get rid of his personality, and of course, Melissa would think that philosophy was a waste of time.)

I understand that Tony isn’t going to not fight. But Tony Stark in only his underwear is pretty vulnerable, even if he has a bit more muscle than Nancy or Mary.