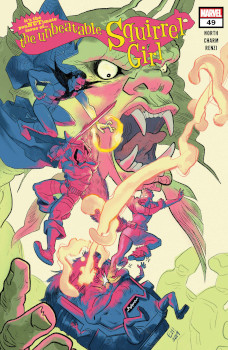 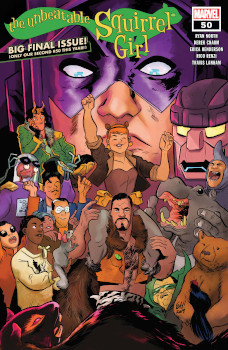 This is the issue where Melissa goes down, and it’s the penultimate issue of North’s long run on The Unbeatable Squirrel Girl. That makes me sad. This book was one of the most consistent and funniest superhero books I’ve read, and its warmth will be a missing part of my reading habits.

As predicted, the other heroes — specifically the Avengers — did show up. Yes, there is news and social media. Yes, they have each other’s phone numbers, and if Nancy and Doreen were busy tweeting during the battle, they could’ve also sent out a few text messages.

Doreen cannot be dead. Not just because superheroes always come back to life, but because I don’t think North would want to end the series on that much of a somber note. Not to mention, only a few issues back the world believed that Squirrel Girl had died.

And she is after all — unbeatable — it’s right there in the fucking title.

The squirrel suits for Mary, Tony, and Nancy were cute. North’s estimate on how many squirrels lived in Central Park alone was pretty cheeky. Same with Tippy-Toe chewing through Brian’s wires. Good thing they were red and green as previously established.

Yay for Kraven returning, along with some friends. There are so many people in NYC. “You must eat nuts, and you must kick butts!” I could hear that bouncing off the page in Kraven’s voice. I will also always take more Ratatoskr.

Of course, Doom doesn’t trust Melissa. That is why no one invites Doctor Doom to their parties. He’s not a team player, and he’s not very fun.

All heart and all the friendships.

I’m just going to be sad right now. I will miss North’s Squirrel Girl and everything it represents about comic books. This is a funny book. It’s a fun and inspirational book. It attracts a wide variety of readers of all ages. You do not have to know every single thing about Marvel comics to enjoy this book. Not many other comic books can do this.

This five-star rating certainly comes from some sentimental feelings around the title. It was a solid ending, but not one that completely knocked me out of the park. Of course, any book going this long will be hard to end.

I didn’t get my Doreen and Nancy shipper end. However, there was some cautious language from North around Doreen and Nancy’s relationship and their future that they are definitely dating. I know queer-coded language when I read it.

The lampshade acknowledgment — about Galactus as a dues ex machina to end the battle with Melissa and her team of villains — was meh. (Doom jetting out there was the best and perfectly in character for him.) He’s still the one solving her problems. Galactus is still a man who was taking care of business for Doreen, and honestly, while I loved the friendship message and even the meta stuff about stories never really ending, it was still a man who took care of her problems.

There are many characters from this book we will probably never see again. Or certainly never see in this form, such as Kraven and his big-brother-little-sister affection for Doreen.

The tribute to Doreen at the end from Tony — and the rip off of the Spider-Man song to fit this continuity — was sweet and a reminder of everywhere we’ve been with her on this journey. I’m glad to have gone on it and read a comic book that’s collectively longer than War and Peace.