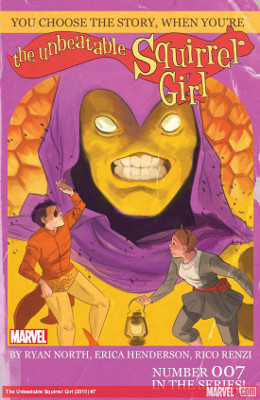 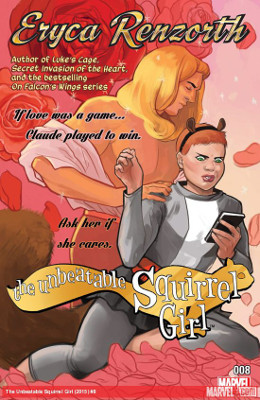 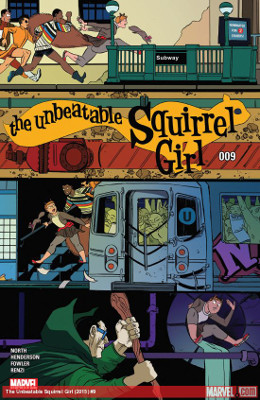 This has to be one of the most clever layouts I’ve ever seen in a comic. Not only is it actually fun, but it’s incredibly well done. Hats off to both North and Henderson for their planning and execution. It was particularly clever how you could read all of it — because who didn’t read all of the other paths in Choose Your Own Adventure books — and not lose your place or the storyline.

Loved the use of science in addition to the Deadpool trading cards. It worked well when Koi Boi and Squirrel Girl came up with a plan to defeat the bees. I loved how Koi Boi just kept dropping facts about his abilities and how fast he can swim and the like. Pretty great. I do wonder if his powers have limits to certain types of fish? Can he call sharks? Or warm-blooded blue fin tuna? Can we explore this in future issues, please?

While, of course, they took Bee Man and bee parts to the police station, it doesn’t seem like the police would be very well equipped to deal with Bee Man. Maybe call up Iron Man or keep the Iron Squirrel costume. So good. So good.

Yes. I loved dating a lot — but really didn’t know much about it in college either — so I’m so happy to see Doreen jump in two feet first. Also Nancy, Nancy is the absolute best in this issue. She’s so right that Tomas has been around her for months and Doreen’s never made a move, so she can’t be upset that he’s dating others.

Ken’s pretty funny too. And I assume based on this and his Koi Boi name that he’s gay. I do wish the text was a little more explicit as we still do live in an era where sometimes people argue about this.

The online dating profiles written by Tippy-Toe, Nancy, and Ken were amusing. They were definitely all about their writers and their perceptions and relationship to Doreen, not actually Doreen. I loved how she mixed them all together in order to get her actual dates.

The questions about if those Doreen dates like squirrels reminded me of Another Round. Only the opposite sentiment.

Hawkjock aka Brad, who adds “babe” to the end of every sentence, sadly reminds me of too many men. Love him being a superhero truther. Though in Marvel comics, you’d have to be extra delusional not to believe in superheroes. Even if it’s supposed to be analogous to some of the ridiculousness of real life truthers.

Mole Man is always trying to get a date.

One thing I’ve enjoyed the most about this title is how much Henderson has really come into her own in the art. The way she uses angles and expresses characters’ emotions builds with each issue. It’s really fabulous art. Especially when the characters change costumes for their different situations and lives.

Mole Man continues to be ridiculous. But it does follow in line that he’s one of those guys who takes any gesture of attention as signal that you want him. Doreen being nice to him is that hook. It’s just her nature to solve problems with friendship and brains over brawn. But this may be a situation where Doreen needs to punch him.

Though I will take Nancy slapping Mole Man every day of the week. Nancy for the win!

The whole scene where Doreen tosses Nancy up in the air so she can fight moloids in the meantime was magical. Of course, they’ve done this before. And of course, Doreen has dropped Nancy.

I love this little world. Though I could do without yet another issue about Mole Man.