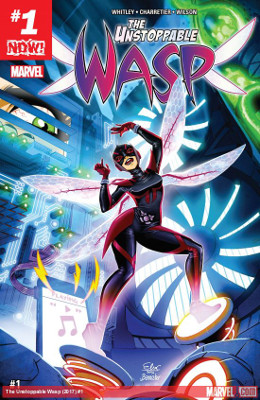 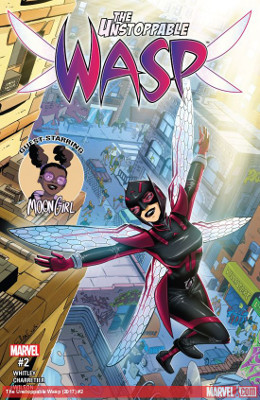 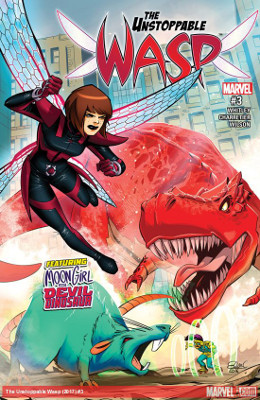 The Unstoppable Wasp #1 by Jeremy Whitley and Elsa Charretier

Nadia is a lovely character. She is rather plucky and friendly for someone who grew up in the Red Room. I do think Whitley explains who she is pretty well. I do wonder if we’ll see her deal with the impact of her inventions that were surely used for evil, much like we see Black Widow deal with her body being used that way.

I adore Whitley’s Princeless and Charretier’s pencils on The Infinite Loop. This is really what drove me to pick up this book.

I love Kamala being the one to escort Nadia to the immigration office. It fit nicely into the pluralism of this book. Into the tone and mood.

I was happy to see Mockingbird arrive. Especially since Nadia fangirled her as a scientist and didn’t bring up Hawkeye or even her superheroing. I’m going to enjoy seeing the MCU through Nadia’s eyes and the facts Whitley drags up.

This issue didn’t feel as charming for me as the first one. I’m not exactly sure why.

This issue was pretty textually dense. Nadia is a talker. That’s fine, but it seems like the other characters were trying to keep up with her by talking just as much. Jarvis doesn’t seem to have a unique voice yet. He’s kind of bland guardian guy. He’s somewhere between a frustrated father and a kind of indulgent grandfather.

The other downside of so much text is less room for Charretier’s art. One of her biggest skills is the ability to tell the story and let the art take the lead, but I’m not seeing that here. It feels like she’s constrained.

I’m happy to have Lunella join the cast. I kind of love how all these great books about great girls and young women have been all about adding in adventures with Lunella.

Tania and Alexis are adorable, and I hope we’ll get a lot more of them.

Oh, Ying, I feel like there needs to be more of her. We need more of that emotional connection Nadia has to her. Nadia seems very unfazed by everything around her — which given her life makes sense — but Ying brings out more nuanced emotions.

I do think this book is incredibly busy. I trust Whitley as a writer to bring out more of Nadia’s emotional state. But this comic is a rush of all the things that are happening.

No one wants a giant raccoon. Trash pandas may be adorable, but they are full-blown menaces. I liked Lunella’s bit about how Devil Dinosaur makes a terrible pet. Though I am a bit sad that Lunella turns down Nadia’s invite to GIRLS.

Lashayla’s style reminds me of Janelle Monáe, who I love and adore. I 100% approve of this character design. I cannot wait to see more of Charretier’s fashion chops.

Priya is a nice contrast to the other girls. She wants to be popular, and while she’s interested in gene splicing, she wants a “normal” life. Whitley shines here in how well he does creating feminist characters who have different opinions and intentions. It’s like feminist women are people, not a big monolith of the same ideology.