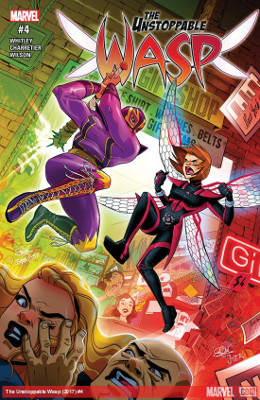 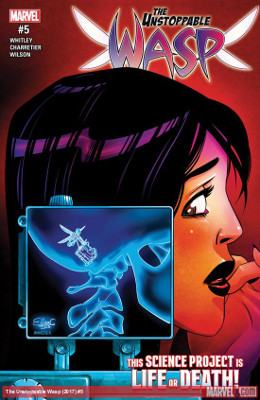 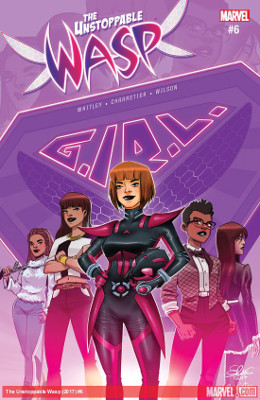 As much as Jarvis serves as the role of guardian here, he does get his butt kicked on a routine basis. It’s a little like counting how many times Giles get hit on the head during Buffy the Vampire Slayer. Though always nice to see that it’s Nadia who must save the day.

I’m not surprised that after seeing the very true colors of her “popular” friends, Priya decides she’s going to take up Nadia’s offer of a great lab and dive into her geekery. I’m going to be looking forward to seeing how Priya may differ from the other girls.

Poundcakes seems more like a wrestler’s name than a supervillain’s. But I kind of like it. Thinking of making it my unofficial middle name.

There’s still too much dialog in this book. Too much clutter. Nadia may not be the bastion of being able to focus, but the story is disjointed and the verbose nature of the dialog doesn’t help.

I do hope that she’ll be able to save Ying.

There were parts of this issue I loved and parts where the tone just didn’t match.

As readers, we’ve been waiting for the entire team of girl scientists to form. They are joyous to see together. They are funny, eager, and the best side of teenage girls. Teenage girls are often shit upon by our society. They are made fun of by adults, especially adult men, for what they love and what they care about. Nothing is more ridiculed than the hobbies and favorites of teen girls. Which is why stories like The Unstoppable Wasp can empower teen girls and change the narrative in popular media.

Charretier’s pencils and layouts are genius here. She gives each girl her own personality through her style and her look. She also knows how to convey time so well, which when your story is around a countdown clock, you couldn’t ask for a better artist.

But…the girls are trying to remove a bomb from Ying’s head. This is incredibly high stakes. Stakes so large that all the jokes don’t blend well with the stakes. Humor is a fabulous tool to break up seriousness, but the transition is not smooth.

The transition is not smooth because the solution is that Nadia goes back to Mother. Is Mother her biological mother? There’s certainly a possibility due to the cyborg nature of her body. (Also how did she get into the country undetected. It’s not like she’s easy to hide or blends in with a crowd.)

I get that we need these hero moments. That it would be too clean if Nadia was allowed to just live her life in the United States without the Red Room wanting her back. She’s one of their top assets. (Though every time there’s issues around an active Red Room, I always wonder just how it fits in with the USSR not being around. I guess they are more like a cross between AIM and Hand.)

Of course, going to Mother doesn’t solve the bomb in Ying’s head.

This was a pretty sweet issue to show how GIRL works together. I’m still trying to figure out who each girl is and their specific personalities. However, as a team, it’s great to see them all come together to use their different skills to save both Ying and Nadia.

Using Vision’s technology to phase into Ying’s head to take out the bomb was pretty clever. I liked Jarvis putting himself forward as the test patient to make sure it would actually work. It was good idea to make sure they could do it before they tried to take out an active bomb.

Though I did expect that bomb to be a little more powerful when it actually went off. Shay — a girl with normal strength — basically just tossed it, and it really didn’t do any damage except take out a few baddies. Good thing Daredevil was in the neighborhood!

I’m kind of surprised Nadia just left Mother there to die. Seems like she would’ve had the Avengers take her away to hospital-jail or something. Instead it was just time to bleed to death with organ failure.

Of course, we do have to deal with the hole in Ying’s head.