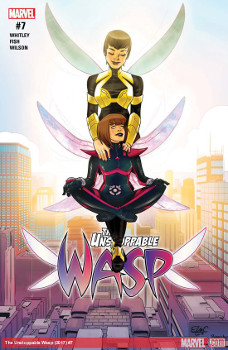 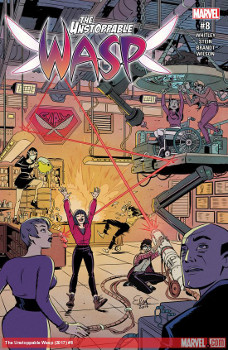 I loved this issue. I don’t know if it’s the change in point of view from Nadia to Janet because I’m an adult who perhaps likes an adult point-of-view. But I think there were a lot of questions about how Nadia ended up with Janet’s legacy hero name and look, and that relationship to Nadia being Janet’s stepdaughter. (Possibly former stepdaughter as I’m pretty sure she and Hank were divorced, and Janet never knew about Nadia while they were married, but this is all an aside and family’s can form in many different ways.)

Whitley does Janet justice by walking us through all her feelings about her own identity as a single, childless woman who’s a superhero, CEO, scientist, and fashionista. As a childless woman in her mid-30s — who does want to support great girls, but doesn’t want children of her own — this narrative definitely resonated with me.

Janet also has been the heart of the Avengers. I adored her picking up the phone and calling everyone from Cory Booker to Matt Murdok to the parents of the girl scientists. It makes me happy that the girls will continue to be awesome out there in the greater Marvel universe.

This issue also serves as a great reminder that comics can have a lot of text and still be great. Whitley smartly uses the text to show Janet’s internal feelings and changes. Too many comic writers use those internal thought bubbles to show us what we’re seeing. Whitley is certainly a talent.

Of course, I loved Janet sleeping in Bobby’s infamous feminist agenda t-shirt. That was just the best shout-out and easter egg this feminist comic book nerd could find.

Fish’s art did the crew justice too. I loved how Nadia’s and Janet’s looks played off each other. In many ways, they looked very much like mother and daughter, or at least sisters.

With how this issue comes together, this is The Unstoppable Wasp comic book that I’ve been waiting for. Just Nadia and all the G.I.R.L.S. being incredible together. And us getting to know all the girls much better as individuals.

However, I do like Janet’s continued point-of-view here, which I don’t think would’ve worked long term if this book hadn’t been cancelled.

I’m glad that they become a family a way that worked. Same with Janet working to make the girls a new home, and Bobby becoming their mentor. Who doesn’t want more Bobby in a comic book.

Yang and Shay’s romance was sweet. It was perfect for their age too.

I hated Janet’s dress at the ball. It was tacky. Ugly and looked bad on her. Sexy without actually being sexy like so much 90s comic art. Same with Alexis’ too high slit. It made me miss Elisa Charretier’s design so much.

Adored Nadia taking the Van Dyne last name after asking Janet’s permission. It was a perfect note to end this series on. So much potential here.