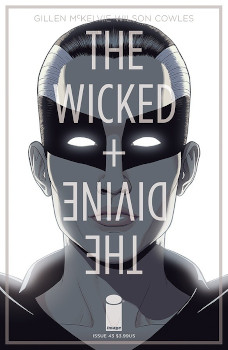 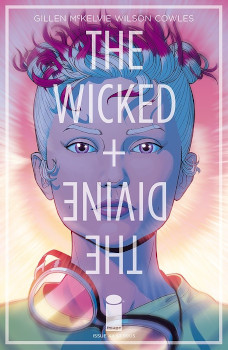 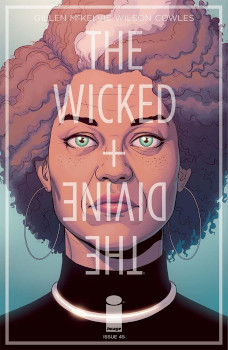 Fucking Tara. Of course, Tara could create herself a body if she wanted to and go all gigantic lady to defeated some zombified Valkeries.

Cassandra saying goodbye to her Norns was perfection. Same with Laura’s reaction.

As much as there are mixed feelings about Nergal’s sacrifice, they did need Dio to defeat the machine that was going to zombify everyone. I did appreciate that when the battle was all done, Minerva was only waiting for them.

I do really love the concept that Gillen plays around with her, about the stories we tell ourselves and their power. But also about how it takes a lifetime to create a story — to create power and knowledge of yourself — and how celebrity and godhood skip those steps, then well, you aren’t going to be around for very long.

We now know that the gods — or the people with the potential for these powers — can live a long time. Ananke did it. And somehow, we’re going to see how you can do it without completely forgetting how to tell your story, how to perform. It did seem a little too easy that Minerva was like, “okay, let’s stop this” because if she did want to stop it, she had many, many chances.

I loved each of the gods and the way they said goodbye to godhood in favor of figuring out what their stories look like in the long-term. However, I do wonder how Tara’s head will survive without some powers.

Of course, I also freaking loved Lucifer declaring she’s not a god. Because Lucifer is both a god and not a god. Lucifer is a holy being of another kind. But also, Lucifer is a god in that the Judeo-Christian god likely evolved as just another pagan male god in battle with other pagan male gods, and Biblical literalists will argue that those pagan gods are just incarnations of Satan, which makes Lucifer a god. However, if all that matters are the stories, then Lucifer is also not a god.

Of course, it is Laura who goes down to hell with Lucifer (reverse Ananke) and brings Eleanor back. Eleanor’s kiss back to life is a fairy tale trope, but a more beautiful and queer one here. It fits with all the mythology while breaking it down.

Yep, Valentine (Baal) never could’ve lived with himself over the sacrificing of babies. If anything was Minerva’s trigger to get him to kill himself, it was showing him the truth that his terrible deeds (baby murder) were all done in the name of a fake disaster. I’m not surprised he took Minerva down with him in death, but also that he didn’t snap her neck or directly kill her with his hands. No, he couldn’t do any more of that kind of murder.

Zahid’s tears for Valentine were a beautiful, but small detail from McKelvie.

The trick to snag the cops’ guns was smart. Cass was, of course, right that nervous cops against individuals they believe to be powered and murderers meant they were likely to be shot. Not to mention, most of them are queer and people of color. I live in the US, and thus, I know that story all too well.

I guess Aruna (Tara) is alive.

Dio’s scene where he tells Minerva that death is nothingness, and how she doesn’t believe him was perfect. Of course, she wants to think that she’s been avoiding something more dreadful than nothing all those years and all those murders.

I am surprised the law was able to make a successful case against the remaining teenagers. While we only see Laura’s sentence, there has to be different ones for each of them. Aruna and Jon (Mimir), for instance. How do you justify putting a head in prison?

Life has happened, and the group meets up again after Cass’ death. They have changed, but they have also not changed. As much as it’s always fun to revisit characters we’ve met before — we also missed the work of their becoming. The hard work to figure out who they are with their potential and how they came into it with age. The real thing they were sentenced to post-godhood.

But also — Cass becomes the narrator who tells us whom everyone has become.

Zahid’s commentary on Valentine was beautiful. Even if we did want them to move onto the next thing in their heart; it seems rather cruel to have made such a kind soul have one true love, especially when they acknowledge that Laura also loved Valentine.

Both Gillen and McKelvie took a major shortcut in Jon’s characterization by making him the spitting image of his father. But of course, he has the ethics and morals that his father never developed.

The ending itself gets very meta. But it’s also an extremely hopeful ending that this book didn’t always seem to be aiming for. This and Umar’s commentary on death being a nothingness defies some cynicism that might’ve been lurking and indeed guided the world of Ananke and what drove her to continue her long life.

It’s weird to come to an ending of a comic book that’s been with me for long (since 2014) and is a magnum opus. This one was satisfying until the very end, which in itself is somewhat rare. Gillen’s ending choices tied it up, but not too tight. They were fitting for the characters and readers who’ve been on this journey. I’m not the same person I was then, and neither are these characters.

Now, if you’ll excuse me, “Life on Mars” by one of my rock gods — who left this plane in 2016 and also gave us his own eulogy — just started playing as I write this.