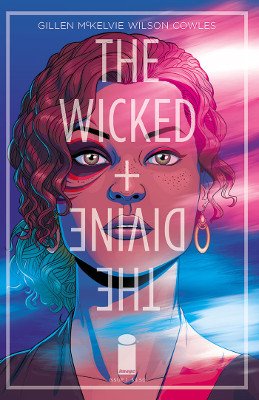 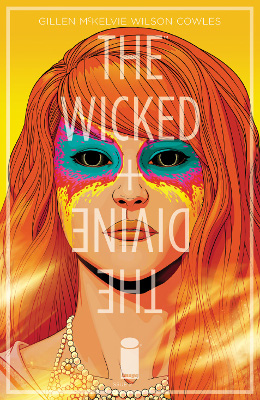 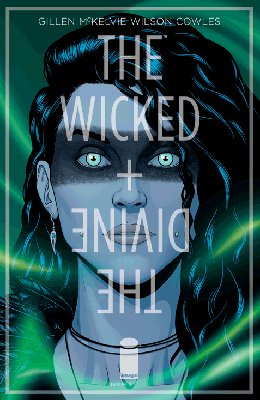 The Wicked + the Divine #1 by Kieron Gillen
Art: Jamie McKelvie

Yep, this book has me hooked. Gillen writing young people and McKelvie drawing it. This is pretty much what this duo knows how to do like a boss. I adored Gillen’s letter about why this isn’t volume three of Phonogram (and that Matt Fraction asked him this too) and how this story exists in a similar realm as a sister story.

Laura is just amazing. I loved her the moment she put on the wig and was the last one to pass out from Amaterasu’s effects.

Luci is likewise perfect. I love this genderswap and her air of not caring. The white suite is a stunning art choice from McKelvie.

The plot definitely went in a different direction than I thought it might. Luci seems a tad out-of-control with her powers. Despite her saying that she knows so much more than Laura, she doesn’t really know that much.

Not sure what I think of Sekhmet yet. But I found her chasing the laser from the rifle to be pretty amusing.

I’m also looking forward to knowing more about this group.

The Wicked + the Divine #2 by Kieron Gillen
Art: Jamie McKelvie

Yep, Laura’s going to continue to go after finding out more about The Recurrence and what they’re all about. Not to mention she’s a little in love with Luci. But who wasn’t in love with that type of young women in college? I’ve heard even straight girls fall for getting to be made into a demon. (Though that will remain to be seen what choice Laura finally made.)

Ah, Ananke is the old lady that we saw in the flashback to The Recurrence before the current one. Interesting to see her come to Luci and turn her into the god that she became.

Of course, Laura enlists Cassandra, a graduate student in religion/journalist. Who else would have this much at stake to figure out more about The Recurrence in order to be cutting edge in her field?

Now that’s something scary to see the Morrigan beheaded and then some random guy (with fire powers) “Baphomet” holding her head. A bit sad that we didn’t get to meet the Morrigan before her death.

The Wicked + the Divine #3 by Kieron Gillen
Art: Jamie McKelvie

And, of course, I should’ve figured that The Morrigan would not be dead. She is, after all, a three aspected goddess: The Morrigan, Annie, and BadB. Does this mean she is three young women? Or just one? I liked seeing Annie heal the policeman who was burned.

It’s kind of easy to hope that Baphomet dies sooner than later. Though he does present a conundrum that there could be many more gods out there than accounted for. Even if he was a lower god.

Cassandra should’ve known that her words were going to piss off Baal.

Not sure how I feel about Laura fighting with her parents. On one hand, very teenager. On the other, how old is she supposed to be again? Especially if she’s skipping out on college. She’s definitely got the isolation thing down.