Since this review was posted, Brandon Graham was outed as an abuser. As comic books are a collective effort, this review will remain live, but I cannot in good faith recommend purchasing this book or other works by this person. 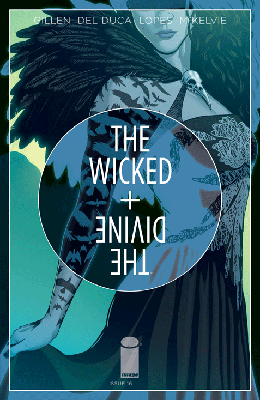 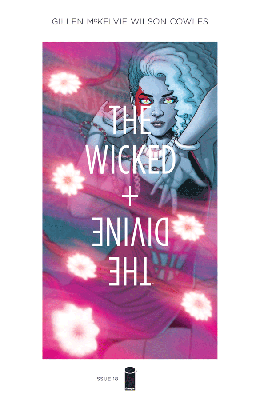 I was really excited about Del Duca doing the guest art for the Morrigan issue — I love her work on Shutter — but this was not my favorite. It seemed sparse. There wasn’t enough details in the backgrounds of the scenes, which is what makes Del Duca such a rich artist. I don’t know if it was a time-crunch (backgrounds notoriously get tossed when comic artists have to rush) or if it was an attempt to match the much more minimalist style of McKelvie.

Hilarious that the Morrigan played Vampire: the Masquerade. Of course, she did. And that’s how she met Baphomet (aka Cameron), who fell in love with her then. Very tragic and all.

I greatly appreciate after Tara that the Morrigan — another goddess with many heads — comes out knowing exactly who she is. Super fitting. Same with being Cameron’s “death” and his “resurrection.” Once again, Baphomet’s origin story suggests even more loudly that Ananke can just make anyone she wants into a god.

The Baphomet meat thing was gross. But I suppose this book hasn’t had many gross things in it, so it was due.

Minerva’s certainly putting the pieces together. Of course, her youth is her achilles’ heel, and Baal seems to harbor a lot of rage still.

Not really sure what we’re seeing from Beth and the film crew.

The Wicked + the Divine #17 by Kieron Gillen
Art: Brandon Graham and Jamie McKelvie

Fuck yeah, Sakhmet. She was the only one in the early comics that Luci was actually afraid of. And this is the reason why.

I’m not entirely sure if I agree about Gillen’s assessment of cats through Ananke’s words about them and Sakhmet’s actions. But I do agree that most people are more like dogs, in that we seek each other’s affections and attentions.

Though poor Ruth, no wonder she just wants to live in the moment. Even if that moment is killing people and eating them with her feline hunger. Graham’s art served well to show the sparseness of her life and lounging. Loved the final scene here Sakhmet guards The Morrigan’s cage, surrounded by her pet cats. The Morrigan is correct that Sakhmet doesn’t realize what else is happening in their world.

Totally called Persephone coming back! She is the goddess of the underworld after all, who lives in both places.

The Wicked + the Divine #18 by Kieron Gillen
Art: Jamie McKelvie

Yep, 100% cheering on Persephone/Laura as she destroys Ananke. After all, Ananke has killed off too many beloved characters. (Basically everyone, but her.) That said, I do hope that we learn more about her, perhaps even get some empathy for her, or at least learn her story. I know, layers.

If nothing else, Ananke has some explaining to do, as they say.

Laura sleeping with Baphomet! That sounds like a giant life mistake. Especially since they are still teenagers or very young adults — which this issue takes time to point out (lampshading?) — and The Morrigan isn’t exactly an unjealous god. Baphomet is nothing if not her pet.

I feel somewhat bad for Baal. He’s late to the party on everything.

Oh, Minerva, her parents are terrible. But she can’t help but care for them. Perhaps it’s that wisdom thing. Worst birthday present ever, from everyone. I do wonder about Ananke’s comment that Minerva isn’t old enough to kill. Do years add to the glory? But they can’t be too old or too smart? Then why Cassandra? (Except that giving her godhood meant Ananke could outright kill her by the “rules.” Not that it stopped her from killing Laura’s parents.)

Tell me more about the forbidden fruit.