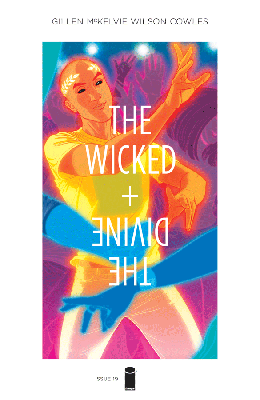 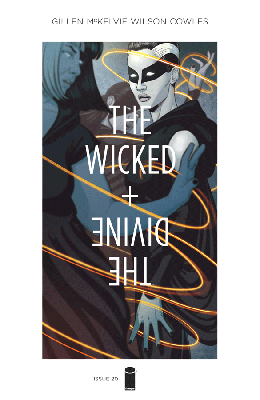 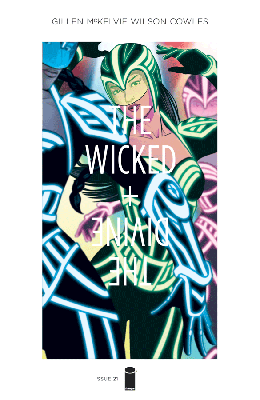 The Wicked + the Divine #19 by Kieron Gillen
Art: Jamie McKelvie

Dionysus is really someone who just wants to be left alone. Left alone to stay awake until his death. But at least he serves to question whether or not Laura/Persephone is correct about Ananke.

They’re going to have to use that owl to find Minerva again. This issue seemed a little anticlimactic in that they grab Minerva pretty easily to take her back. Will it be her birthday, after her birth hour, that Ananke tries to kill her? Interesting that there’s ritual behind the murders.

I also feel like we need to get to know Persephone again and how she’s changed. We went with Laura on her journey to becoming Persephone, but we’re missing some threads.

I still wonder what Ananke is promising Woden to make him work for her. Maybe that he’ll be the last to die. Or have a day outside his environment suite and looking beautiful again.

The Wicked + the Divine #20 by Kieron Gillen
Art: Jamie McKelvie

I do love that Laura went to Urdr to tell her the story. Cassandra was the documentarian after all. She was also the one who knew Laura as a human before they both became gods.

Persephone in hell felt like her descent into depression after Luci died. I get it. I get the metaphor, but it was anticlimactic. Or slow. Or how unconvincing Baphomet is in his arguments.

The reveal that Baphomet is actually Nergal was pretty great. Especially how immediately pissed off and ashamed he was of his godhood. It really fits someone who tries to be cool and desires to be cool, even when playing role playing games.

For once, Laura outsmarted Urdr. However, it was only in the name of something stupider. Especially since Ananke, for sure, has the upper hand.

The Wicked + the Divine #21 by Kieron Gillen
Art: Jamie McKelvie

I haven’t talked about McKelvie’s art very much in my reviews. But here, he really shines. The way he draws the fighting of the different characters is brilliant. Dionysus and his sticks with energy blasts were just gorgeous. Especially in contrast with Ananke’s destructive fires. Or Baal’s electricity and how it comes out his eyes. McKelvie’s details add so much to the characterization and the brilliance of gods fighting.

Of course, Woden builds a super Valkyrie out of all his Valkyries. Or at least that’s what I assume is going on to stop our hero squad. Though it remains to be seen exactly what Ananke’s doing besides killing people.

Minerva is certainly an easy character for them all to rally around. Even Amaterasu tries to save her in the end, to possibly her own demise.