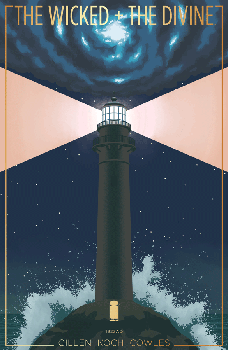 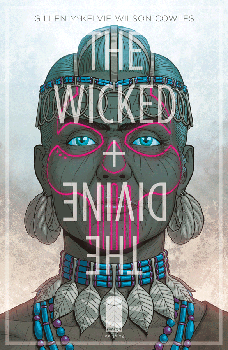 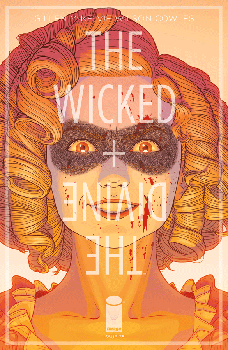 Now that we know about Ananke, the twists and turns for 1923AD weren’t as mysterious. Though I can see why Gillen didn’t want to release this tale until we know about her killing the gods.

So I’m going to say that the Great Evil is wrong, but instead, there’s a vision the gods can craft the world to. Or perhaps it’s just that their personalities set the tone for the next 90 years. Or is the random Eldritch energies, and they come in all forms and Ananke seeks to catch them.

This format was pretty interesting. Gillen’s prose here reminded me more of perhaps if I was participating in one of his D&D games. I feel as though I should have much more to say about this issue than I actually do. In addition to the D&D game, it feels like a book written in the 1920s. The lavish fawning, but almost mockery of fashion, style, wealth, and excesses with macabre tones and languishing “shellshock” (PTSD) from WWI with notions and over-and-undertones of rising fascism as the wealthy leaned more right than left fit with any media from that era.

We once again see a Woden who embodies his generation’s worst, the Nazis and other devotees of white supremacy, the way our current Woden is a internet troll. (The trolls who did become Nazis.) We also see Woden the tinkerer and builder as they aptly discover he, not Lucifer, build the castle and lighthouse on the island.

Lucifer is the first to die here too. Baal cares most about looks — with this Baal all about old money and white supremacy and the current Baal’s appearances are concerned with hiding his queerness and making the media happy with the gods. The Norns think they are extra clever here too, and now I can’t help but wonder if cleverness will be Cassandra’s even greater downfall the way the Norns killed one of their own. (It is interesting that they don’t all die when one is killed.) Both Amaterasus are obsessed with their art and shallow. Minerva is so young again, and Dionysus always naive.

If they do all blow themselves up, this means that Ananke remained Ananke here. But Nazism still happens and millions die, even if Hitler and company are defeated. Though fascism and its ideals certainly take other forms. If this was the Great Evil they were supposed to stop.

And maybe there is no point to the gods’ lives and their lives’ end. Or maybe we’ve just spent too much time in 1923.

The Wicked + the Divine #34 by Kieron Gillen
Art: Jamie McKelvie

This issue was enjoyable. I appreciate Gillen now moving this story into the part where all the secrets come out, all the mechanisms driving the story are now being revealed.

I assume that Ananke’s sister is Minerva. I believe there’s been a Minerva in each pantheon. Of course, it’s not like some godly energy couldn’t come back as they please. And as she clearly states, she will take care of business if Ananke is no longer able to. Which given her death…Ananke would need someone else to carry it out, or become her. I am still suspicious of Persephone’s journey given that Ananke’s sister says she’d be the last to be called, which Persephone is technically the last god who was called into existence.

There’s also something interesting here where Ananke’s sister says Ananke doesn’t have to do this. She doesn’t have to kill and collect the heads. That there’s another way, but that Ananke has set them on a path.

What they say about immortality here is haunting. I wonder how many fucks less you give about everything when you are that old.

I loved McKelvie’s design choices for the two sisters. The sister looks sweet until you see the skull in red on her face, and the horns on Ananke’s head are properly menacing. The mouths of the other heads sewn together so she can’t hear them is a likewise scary choice. But the sister is not afraid; her only worry was to get her grandchild to run away.

Love the other Norns coming to Cassandra’s, Laura’s, and Jon’s rescue. Likewise, Cassandra and Laura having a heart-to-heart and talking how they were both used worked so well, and was much needed in this book. Especially if we are actually going to get to the bottom of the mysteries and then do something about it.

Of course, Woden put cameras in the technology. That all-seeing power of Ananke’s had a little help. The joke about Baal’s chain necklace was pretty hilarious. I assume Woden has discovered that Ananke was collecting heads.

I’d predicted the stuff around Minerva, and what I assume is the switching of the sisters each go around? It’s still a little unclear. Though the 1920s Minerva was definitely signaled as evil once she got all the power from the heads of the gods and killed that Ananke. Which makes so much more sense around how old Ananke looks and how they are using mortal bodies.

Of course, current Minerva manipulates everyone. No one is surprised that Woden would make a deal with the devil. He has been since the start. And Cass is perhaps being manipulated by her emotions (again) and assuming that Minerva is an innocent.

I did gasp at Persephone finding Baal’s chamber with children’s bones inside. (Of course, her finding that room and Minerva alerting Baal about the discovery is the perfect way to get rid of Persephone. Though if that camera lightning bolt lands the wrong way, Woden won’t be able to watch.)

Baal’s ending line — “I told you. I always told you. I’m not afraid of who I am… But everyone else should be.” — combined with McKelvie’s art of Baal lighting on fire and showing his true nature was brilliant. Persephone sure knows how to pick them.