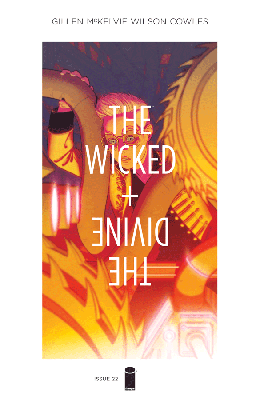 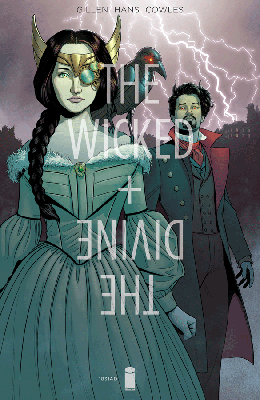 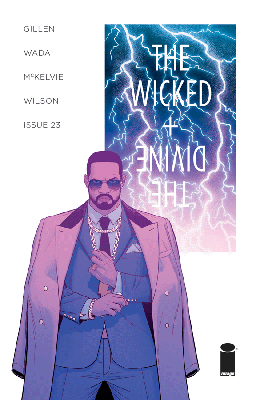 For some reason I’d thought that Ananke had killed more than three gods. I don’t know why, but I swore a few more gods went splatter in the last few issues.

I’d guessed that Ananke was killing the other gods in order to continue to expand her own life. But it looks like her reasonings may have been less selfish. Though I’m sure we’ll find out in the next arc or that will be our new mystery anyway. Also, someone may have to become Ananke, or at least play her role, which I see a final arc. (Seems likely to be Cassandra/The Norns, but the story still does revolve somewhat around Persephone/Laura.)

I do hope that we get to spend some time with other eras of gods like Gillen has promised.

I’m not sad Ananke is dead because as Persephone says, they can now do whatever they want. I am interested to see if the two years until death myth rings true. And what does death mean? Does it mean death of the god? Does it mean death is fated, so it doesn’t matter what they do to try to avoid it? Do they die on the exact “birthday” of their godhood? So many questions. But that’s what I love about this book as Gillen often gets to those answers in the story and the questions themselves are created by the layers of story.

Persephone/Laura is a bit out-of-control. Killing Ananke was definitely one of the more impulsive, and while covered in grief, immature moves she’s made. I love them referring to Cassandra as the adult. True facts.

Of course Woden’s device was to control all women. He’s so gross. But interesting that even he kind of comes around to change sides. The meta about the super villain speechifying was pretty great.

Wicked + the Divine has many strengths around its mythology, and one of the surprising ones has been the great guest artists. Hans is one of my favorite artists, and I can’t think of anyone better suited to draw 1831.

I am curious now how the gods rotate throughout the years. In this story, we have Inanna, Wooden, Lucifer, and the Morrigan, who are all present in current times. However, Hades also exists. How is who comes back determined? Are there rules around this? Do certain gods always come back?

The two things that most intrigued me about this volume were Hades’ death and both Wooden’s and Inanna’s pregnancies.

I’ve questioned whether or not the gods’ deaths were inevitable. My suspicion from the beginning is that Ananke orchestrated all their deaths in some way. I mean, it’s likely that Hades would have been suffering from some illness that 1831’s medicine couldn’t fix. However, seems like godly powers would keep those away. But instead, we see him on his deathbed and begging Ananke to end his life.

On the other hand, Wooden believes herself to be the killer of her children. Since all her babies, which she gave birth to, suddenly turn into ash in their infancy. It’s revealed that Inanna has been killing them on orders from Ananke. Then further revealed that Inanna herself is pregnant.

This begs the question of what happens if two gods have a baby? This story says that they’ll live and could grow into adulthood. Is Ananke a child of the gods? Why is she keeping them from procreating? Is this the big threat? Also Ananke must be able to track them down in some way.

I do hope that we get more of these former god stories.

This issue is amazing. It’s ambitious and gorgeous. It also speaks to the success of Wicked + the Divine that they were able to commission a bunch of excellent professional journalists.

I adore Wada’s art. He does have the eye of a fashion photographer in how he draws and captures comic characters. I love the unapologetic queerness of Baal. I love how Amaterasu looks like Florence Welch and Luci is all thin white duke David Bowie. I so want to cosplay as the Morrigan in that first drawing. Gorgeous art.

Gillen did a great job having all the guest writers embody their own voices and storytelling styles. For the writers of who I remember reading pieces by them before, they were spot on. It also gave it a special flare, instead of Gillen trying to change his voice dramatically for this.

I love how Penny “interviewed” Wooden, and how much her story reminded me about the actual coverage she did of Milo Yiannopoulos. Both made her uncomfortable, while she knew them. It also made me even more curious about what’s under Wooden’s helmet. Such a frustrated fellow.

Interesting to see Baal hooking up with Persephone. I still want to know more about Persephone’s powers. I guess I don’t really understand what Baal meant by the general public now knowing about their powers. Haven’t these people with the 90 year cycles always known the gods had powers? Why would they think it was a fancy light show? Laura was such a true believer that I never considered most people didn’t find them real.

Amaterasu saying they can save all of humanity certainly speaks to the next arc.