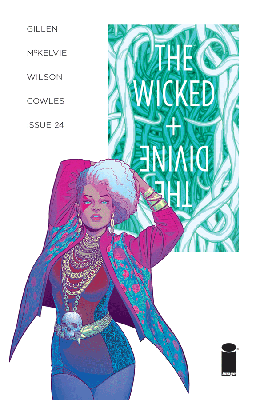 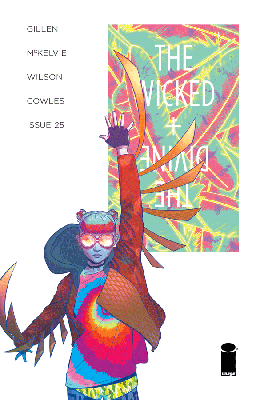 The Wicked + the Divine #24 by Kieron Gillen
Art: Jamie McKelvie

Laura seems to be unhappy with her new godhood. It was forced upon her, rather when she stopped wanting it. It came at a high price: her parents’ deaths and arguably Luci’s and Inanna’s too. Who if we look at the entire pantheon, they were the ones she was closest too.

And it just came to me — Laura is going to be the new Ananke. That’s my current fan theory for the ending of The Wicked + the Divine. She certainly will be the last one to go as she’s the youngest in her godhood.

Laura’s unhappiness signals that she needs a mission. She needs a path. It used to be to figure out who killed Luci. Now that part is over.

I don’t believe Woden will be dead next issue. No, Cassandra will have stopped her. Baal will be the next to die.

The Wicked + the Divine #25 by Kieron Gillen
Art: Jamie McKelvie

As predicted Woden is still alive, and he will likely remain so as we continue this tale. He makes a good asshole to have around for kicking. Especially since we really don’t have an antagonist (which he’d be a rather boring one) until this shadow monster thing at the issue’s end.

Welp, Baal may just die fighting this thing. Since they know nothing about it, except maybe some ominous, vague warning from Anake.

Of course, Cassandra is the only adult here. Even if Baal has his fake family with Laura as a stand in for Inanna and Minerva as the kid.

I want to know more about Laura. She’s definitely hiding something, and I’m glad to see Cass call her on it. Those powers from Lucifer weren’t just transferable goods.

The Wicked + the Divine #26 by Kieron Gillen
Art: Jamie McKelvie

I’m a sucker for the roundtable and interview intense conversation style situations in comics. That’s always going to give a comic another star if done well. Gillen and McKelvie know how to make it happen.

Of course, Baal and Amaterasu already knew about these darkness creatures. And they have other information from Anake they didn’t share. Apparently, only sky gods can destroy them. Persephone’s power only enhances them.

I do think it’s interesting that they consider Persephone an outsider still. Especially since Baal wanted to play house with her and Minerva. He very quickly moved to not supporting her and making her the stepmother whose advice isn’t wanted. There’s going to be some anarchy.

It was even colder when Amaterasu brings Persephone to Baal’s family’s house, and his mom makes it a point that Baal’s never brought her home. Burns. Nor has he ever discussed them with Persephone.

Morrigan to Woden — “Grima Wormtongue did not accompany the ring to Mordor” — is my very favorite.