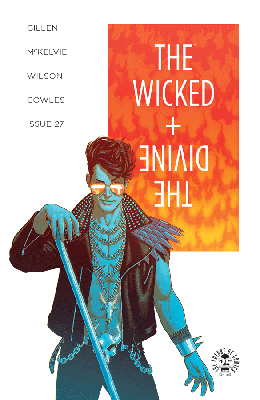 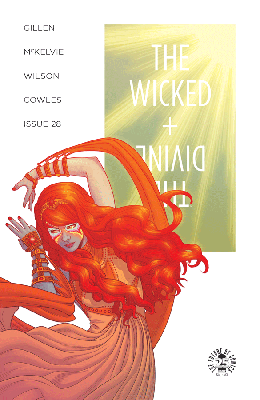 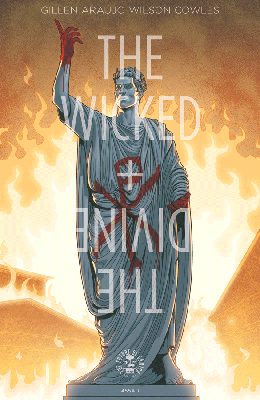 The Wicked + the Divine #27 by Kieron Gillen
Art: Jamie McKelvie

Oh, Persephone, she always brings Baphomet to the party when she wants peak self-destruction. Clearly, she’s asking for the Morrigan’s wrath. And apparently also risking her life with Sakhmet. I really want to know more about this hell she can go to. And maybe who’s there?

Speaking of self-destruction, poor Minerva. Baal really shouldn’t leave her alone. While it’d be impossible not to focus on one’s death day, she’s getting a little morbid even for this book.

I loved Cassandra bringing in Professor David. (Same with the Norns wondering if they too die. But no one having the answer.) I’m completely curious about his insights into the gods, and I bet Gillen has written up some text. Whether or not we actually get it is another matter. It must be extremely frustrating for Cassandra to know how the gods who make it beyond year one go bad or mad. She is such a logical person. Not to mention transgender people are often insulted around their mental states and the insanity-making godhood must bring up issues for her. I do hope Gillen addresses this.

The Wicked + the Divine #28 by Kieron Gillen
Art: Jamie McKelvie

This issue could somewhat be called the issues of growing up. Especially since all the characters in this issue are the older ones. The ones who are mostly adults.

Oooh, Professor David is Woden’s father. I didn’t see that coming. It does make sense that as a fully grown and even old adult, David would have to have another connection beyond the magic. The youth only seem affected by the magics.

I do think Cassandra, while rude in her approach, does offer him some kind of truce. Then is not kind in her somewhat blackmail of Woden over his real identity. Of course, he has issues with both his parents. Who hadn’t guessed.

Cassandra must deal with the fact that she’s less of an adult than she pretends to be.

As Sakhmet tries not to feel, she just may have to clean up her own mess. This is the way she will become an adult. They cannot cover it up like Ananke did when Sakhmet ate her dad.

Laura realizes her actions have real consequences when she sees Baphomet’s face. Interesting to see Baphomet moved from an asshole to abuse victim. We will see how the Morrigan must grow up.

Amaterasu will have to deal with not always being right and also her dead followers.

We also find out that perhaps Ananke was the most adult adult of all. And just to whom is she writing to? This means we will have another god or goddess in play.

I’m always excited to learn about the other timelines, but this issue disappointed me. I’m not sure if gave a ton of new information, except that Ananke learned early on that Lucifer had to be one of the first ones to die. Or it seems to be a theme that Lucifer rebels.

The group of gods seemed fragment in this timeline. Which does beg the question of how Ananke was able to deal with them all in a time where she’d have to use their powers to get place to place. In a time where people didn’t typically travel more than 25 miles from their home.

It was interesting to see Lucifer burn himself out. (If a bit gruesome…) Then what is this darkness that Ananke was keeping away and how are their deaths connected? The darkness is more of what I’m curious about. Besides Lucifer burning himself to death.

There does seem to be trends in which gods appear. Is that always true or does Gillen just enjoy certain parts of pantheons more than others? Does it have to do with which cultures are dominate at the time? How is it determined what part of the world where the gods reside?