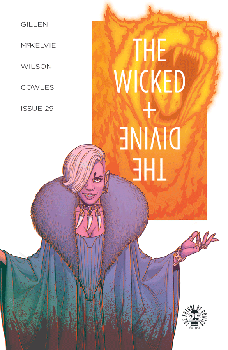 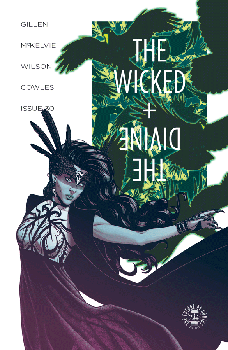 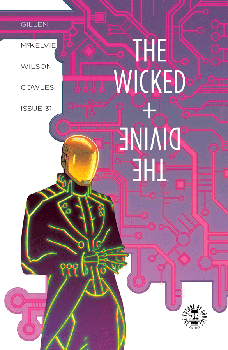 The Wicked + the Divine #29 by Kieron Gillen
Art: Jamie McKelvie

This issue felt cartoon-y to me. In previous arcs of The Wicked + the Divine, the storytelling has moved me. Here it felt like a bunch of insufferable teenagers who just can’t get on so time is the motivating factor.

Maybe Sekhmet’s story is just not that compelling. We knew eventually that the gods — without Aneke — would do something to get the public to distrust them, to fear them. They aren’t to a point where people are trying to hunt them down. Yet. Maybe if the police “catch” Sekhmet.

Amaterasu has become the worst. I’m bored with Persephone’s secrets. As bored as she is with this woman who is not Luci who she slept with. I don’t care for the Morrigan as abuser of Baphomet, in a plot that seems only skimmed on a surface-level. I don’t believe Dionysus can save anyone.

And we haven’t seen this Great Darkness in a while.

I did love Minerva’s outfit here. And I couldn’t stop looking at Persephone’s abs. Is this part of godhood? Or just youth? Can I get those abs?

The Wicked + the Divine #30 by Kieron Gillen
Art: Jamie McKelvie

Does Dio sleep here? Is he so deep in the dark that he can rest is head? Is that what we’re seeing? Or is it his energy burning out? Maybe a little rejuvenation?

The Morrigan pointing out that Dio’s in love with Cassandra was pretty point on. And the zillion ways about how it would never work. Though I did wonder a lot about Cassandra’s dynamic with her Norns. (Though still curious to see if they are the part of gods that will die too.)

Not surprised to see Laura with Sakhmet. She’s always wanted the love of all the gods. And that’s what Persephone does anyway. (Well, in the less ‘pillage and rape’ versions of her myth.) Though it is interesting that the Morrigan can find her darkness.

I cannot tell if this issue floundered for me, or if there was subtle set up for the next one.

The Wicked + the Divine #31 by Kieron Gillen
Art: Jamie McKelvie

McKelvie’s art shines this arc. Amaterasu’s and Sakhmet’s fight in the British Museum was beautiful. The pacing of the panels. The movements. The choices of which artifacts to put in as, of course, Sakhmet was in the Egyptian section.

And, of course, Gillen has Amaterasu positively comment about how British imperialists “collected it up from all over the world and it’s kept safe here so we get to look at it.” There’s been lots of discussions around having a white girl be a Japanese goddess, and well, here we have her worldview. It’s problematic af, and Gillen set her character up to eat her own words.

Amaterasu was also the character who seemed to be doing the least in this book, so killing her off seemed like a death for excess characters we don’t have time for.

I cannot say I’m surprised Wooden betrayed Dio and Cass. It’s interesting to see Dio’s power as a form of brainwashing. We take for granted that he’s perhaps one of the few pantheon members who is truly a good person. (Which may also be a huge anomaly for those taking on Dio’s persona.)

For me, this arc hasn’t been incredibly strong story-wise. I don’t know where it’s going or the points of the work the characters are trying to do. (Besides tracking down Sakhmet for her very straightforward killing of a bunch of people.)