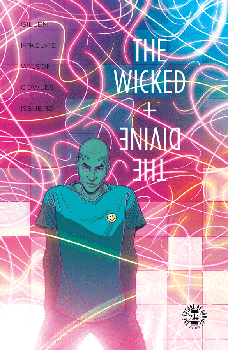 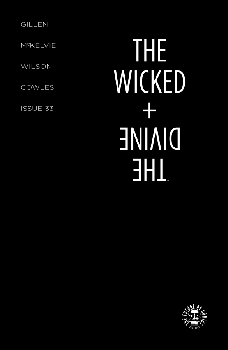 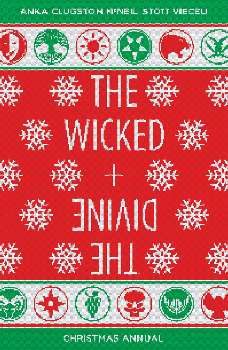 The Wicked + the Divine #32 by Kieron Gillen
Art: Jamie McKelvie

Minerva becomes a killer. She does so to save Baal against Sakhmet. Persephone seems right on her way to being the next Ananke. That’s definitely what I’m seeing happening here. The others will die, and she will descend to her hell to live until the next round of gods are to be called.

Though did Minerva use the snap to kill Sakhmet?

Dio gives his life for Cassandra. His one true act of love.

Woden is the worst still. I cannot believe this guy is still alive. I suppose we need an antagonist.

The beeping in the wall that no one heard. I’m shocked that they never tried to find secret passages or anything else in Ananke’s house. Maybe the machine was just a giant red herring.

The Wicked + the Divine #33 by Kieron Gillen
Art: Jamie McKelvie

I like and dislike the reveal about Woden and Mimir.

The thing I dislike about it is that the foreshadowing was not there. David was a more recent character we met. I’m not saying I have to guess everything for the foreshadowing to have happened, but it wasn’t quite right. Unless, we go off a couple assumptions: 1) we know there can be more than 12 gods (Persephone/Laura) and 2) the other person with “access” to Ananke and the Pantheon was also turned into a god (the Norns/Cassandra).

What I did like about it was that the reveal fit with patterns we’d seen in other gods (see above). And I liked it because we so often see shitlords as teenage boys or young men living in their parents’ basement, when they are often revealed — especially the worst ones who lead other shitlords and have power over others — to be middle-aged men. David fits this profile. I also find it odd that Ananke was cool with promising him life after those two years. If anything, that more than his identity and sacrifice of his son, were bigger draws of loyalty for him to her.

Mimir is, of course, not blameless since he is also the builder of all this technology. Which is maybe just to behead people.

I definitely called that Ananke was still around. I thought the next Ananke would morph into the role through necessity, and I thought Laura would take that mantal of guiding the next Pantheon and keeping away this great evil. This still may happen. Especially since the snapping seems ot be a big clue. However, I didn’t see her moving into Minerva’s body. Perhaps that’s what the machine actually does.

The heads. I’m still a little blah on the reveal of the heads. And the gods still being conscious. It wasn’t just their heads. They can still talk and obverse. Also, if Ananke needs a four, can’t she just take Mimir’s? Or is that part of her promise to David? Who may actually know what’s going to happen, maybe?

Oh, Laura, and thinking she’s the reason her parents are dead because she wanted godhood so badly.

A lot of this arc floundered and the writing felt like it was directionless. Given all these reveals, it would’ve been nice to see them layered into the arc before they happened.

My exact reaction was “whoa, there are penises in this book!” and then showed the comic to my partner.

It was cute and sweet to see Inanna again. He was kind and too soon killed. I love how he just rolls with it, and how he lets Baal discover how he feels independently.

Stott’s Lucifer isn’t my favorite. There’s just something about how she holds herself; there’s not enough bravado. Maybe the point is trying to show that even Lucifer could have her feelings hurt.

Sakhmet would be the one to do it. And wow, being called “a bad person” by Sakhmet is a low blow.

Baal is the character with a true heart.

I’m trying to figure out what this story is supposed to say about fans. And the effects that the gods have on their fans.

The Morrigan seems like she has to expend a lot of energy to gather her followers. Cam continues to be not much more than her fanboy turned what? Abused partner?

It’s interesting here to see Ananke related to her. I also think this feeds into my theory about how one of them will end up as the Ananke of their generation.

Vieceli’s art here is probably my favorite in the book.

Again, art not my favorite. And I’m not sure this scene layered on anything more about the story.

That last line by Lucifer about Hazel turning into Amaterasu where Lucifer says “I’m sorry” is killer. Like microphone drop killer.

It was nice to see their connection beforehand. And how it wasn’t exactly healthy. It is interesting to see how those chosen to be gods were fans. Seems like that might make them more easy to manipulate.

I did not expect to see Baal and Laura sleeping together before Inanna died.