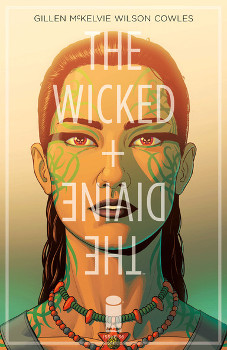 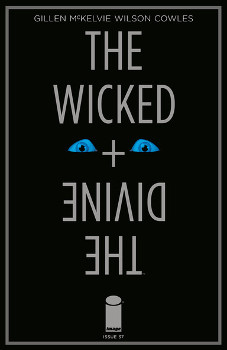 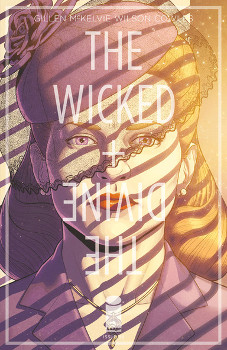 I’m of two minds about this issue.

One, except for two reveals — showing us the master timeline and Baal’s confession/Persephone’s confession — not much happened. A bunch of stuff with the characters wasn’t continued forward. I keep considering how few issues we have left with these characters. This is a countdown.

On the other hand, huge props to McKelvie, Wilson, and Cowles. But especially McKelvie in having to create all those panels and make them culturally and timely appropriate. That’s a ton of hard work that deserves all the accolades. I also appreciated the limited art they did with Baal. It was stylistically a good choice. But also gave McKelvie and company a break after their workout.

Are baby sacrifices actually keeping the rest of Baal’s family alive? Maybe, maybe not. For as much magic as we see here, the rules of magic — or the rules of what is actually happening still seem nebulous to we readers. Baal himself is a justifier. We saw him do this with his relationship with Inanna and with Persephone. Hell, he does it when he releases her here. I kind of think he will truly break when/if he encounters Inanna’s head.

I believe the flashbacks reveal a more complicated history around Ananke and her intentions. I don’t believe these failed spells are meant to save the world from darkness — maybe this was their original intent — but I do believe whatever cycle she put herself into she’s attempting to redeem herself out of, or save her sister. We’ve all heard the adage, “Insanity: doing the same thing over and over again and expect different results.” This is what she’s doing. And exactly why Ananke’s doing this, we’re still not sure.

Persephone has decided that she does indeed care. Whether it’s their dire situation or her pregnancy, she’s decided not to be the hero we want (like she did earlier), but the hero we deserve. In that she’s not a hero at all. She seems to want to put her pregnancy, and the question of who’s the father, into truth.

Does the Morrigan redeem herself through the ultimate sacrifice? I don’t know. She certainly had never quite worked her way into understanding how her personalities worked together. We see the Morrigan blame Badb for her abuse and ultimate killing of Baphomet, and then see Gentle Annie kill themselves to bring Baphomet back to life. I’m not sure how I feel about gender reversal here. (Obviously, women can be abusers too.) However, in our society, most abusers are still men, and with the #metoo and all the other discusses around harassers, it seems odd to have her inability to let go be the source of the abuse. I also think the Morrigan herself was not in play as much as the others and her motivations harder to suss out. (It’s also possible Gillen had plotted for this always to be the end of the Morrigan, long before our current climate happened. Not that abuse is new, but more public discusses and moves toward outing abusers is.)

McKelvie’s art during their fight was wonderful. It was too much — as they are two melodramatic goth kids — and it was layered in their history. You at least get the impression that without powers things might’ve gone a different direction.

“Of course they can’t resist it.” Ananke refers to godhood, but also the intersection between godhood here and fame. Fame, especially as a young person, is impossible to resist. Which is why Ananke goes after teenagers and young adults, not 40-somethings, to manipulate into becoming a member of the pantheon. Well, with our exception of Woden, who was an adult man who craved a fame he never could’ve had access to without sacrificing the son he didn’t care about.

I’m not quite sure what to make of these flashbacks. Since I haven’t been reading any comic books consistently, I have had issues really digging into this mystery as it wraps up and reveals itself. (This is not a The Wicked + the Divine issue, but a me reading issue.) It does fit with the Ananke becomes Minerva and vice versa. Which if we’re going with Maiden, Mother, and Crone, and Persephone is pregnant, this signals to Persephone as Mother. Or that Persephone will take the Ananke/Crone space by the end of our tale.

Nergal/Baphomet remains useless as ever. He’s ready to put together a temple for his dead goddess.

Baal is as selfishly focused as ever. He misses every single tell Minerva has about her true alliances because he’s too wrapped up in himself.

Cassandra isn’t as tough as she acts. She’s never been, and her act and isolation of some of the people around her means that they are pawns for Woden, but more for Minerva. Woden is an idiot who believes he’s too smart to need to question anything or ask questions.

Did Persephone give us her godhood? If she ceased to exist, specially when Cassandra divined Persephone, I believe that’s what it would mean.