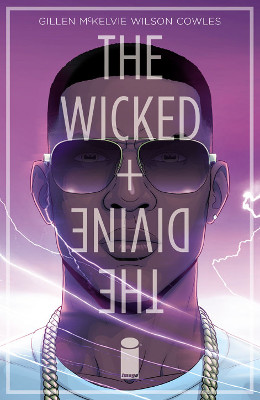 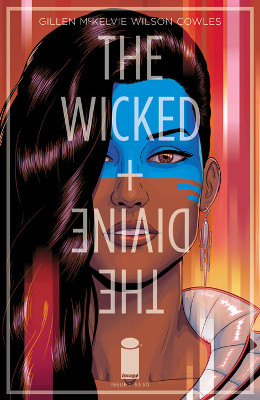 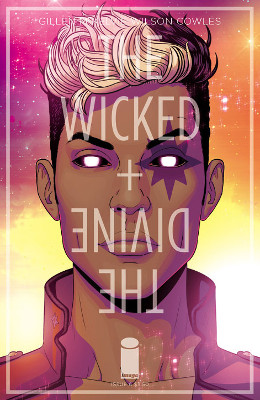 The Wicked + the Divine #4 by Kieron Gillen
Art: Jamie McKelvie

Awww. Laura is trying not to be so much of a fangirl, when she really is a head-over-heels fangirl. It’s adorable. Maybe Cassandra’s just too old and jilted to be under the spell? Definitely seems like the young people’s music movement and Cassandra’s just a bit too old.

Loved Baal explaining how he found the location of Cassandra and Laura. Snapchat magic. Hilarious. Same with Baal’s painting of himself.

The Pantheon was a bit starker than I’d expected. I supposed McKelvie is always one for clean lines and crisp designs. I was actually surprised to see Ananke just hanging out with them. I suppose she is like the den mother of fate. Interesting to find out that The Recurrence must keep happening in order for human inspiration to keep happening.

Oh, Luci, she’s definitely going to get herself killed. But would rather go out in a blaze of glory. I bet there are some human weapons, especially this day in age, that can more easily kill her than in days of old. We do find out that she lied about being able to turn Laura into a demon.

The Wicked + the Divine #5 by Kieron Gillen
Art: Jamie McKelvie

I suppose I should’ve seen Ananke killing Luci coming, but I didn’t. I am surprised that Ananke let herself be captured on camera. Particularly that she continues to live when the rest of them die.

Does this mean Laura has become the devil herself? I mean, that’s what she wanted essentially was to be one of the gods and in their fame. This is a clear be careful what you wish for scenario.

We are, of course, no closer to knowing who tried to assassinate them and who actually killed that judge.

This book is absorbing the way it’s absorbing to watch characters with knowledge of their death and fame and superpowers (what makes them special). It is a story about death, about how we’re all dying, but how the immediate knowledge of that death changes what we choose to do. Luci didn’t want to spend those last days in prison, and even the rule following Baal admitted that he wouldn’t/couldn’t either.

The Wicked + the Divine #6 by Kieron Gillen
Art: Jamie McKelvie

I wondered how Laura was going to be put back into touch with the Pantheon. This time, Inanna has hired her to solve the mystery assassins, since he discovered that they were fans of the Pantheon. And who can he trust, but the one fan who believed in Luci when no one else did.

Since Luci’s human name was “Eleanor Rigby” were all the Pantheon named after pop songs or related stuff? I’m also wondering about the Pantheons of the past, given that pop songs are a recent invention. Poetry? Plays? Art? What did they do?

I love the bit of history about how there are debates over if a generation is worthy of a Pantheon. Interesting that the people most vested in it are those whose generation was skipped over. Which, of course, puts a further divide between the old and young.

Laura’s scene with her mom was just sad. And I have a feeling Laura’s going to get herself into more trouble with offering herself up for appearances at cons and interviews and the like.

Join the Pantheon and buy The Wicked + The Divine Vol. 1: The Faust Act