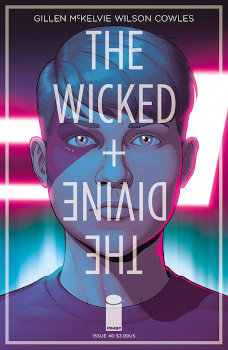 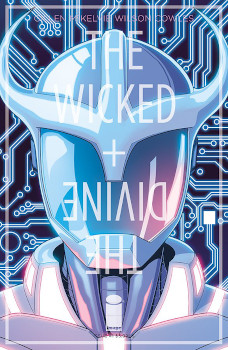 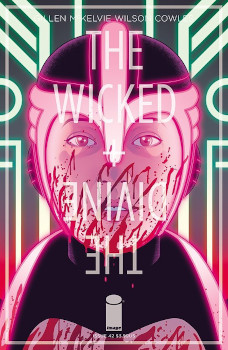 It’s a lovely callback to see fans taking center stage for the beginning of the last arc of The Wicked + the Divine, especially since we were led through this world by Laura/Persephone, our ultimate fan. Our fan who seems to be the one who will save us — without powers.

I guess it’s nice that Ananke has learned something since giving herself the plague? I mean, not any lessons about not killing people. She’s still all about that.

Gillen smartly used each fan to tell a very personal story about how music transformed their lives. He speaks directly to the power of music, which is what all these stories are about at the end of the day. I loved the letter in the back from the reader who found everything in music as a religion at a Florence + The Machine concert. I have to agree with that assessment, having also seen them in concert. It was a religious experience.

Baal still believes that he’s on the side of the angels. I guess that this Great Darkness is some offshoot of a project or secret power Ananke has. It’s something primal she can bait those gods who want to do good in the world with and distract them from her. Baal is going to have some trauma to deal with when he finds out precisely what was happening.

I am curious to see how Ananke will react to her plans being foiled. And wow, Baal was going to sacrifice his mother. (Or maybe he believed her special seat would save her.) Baal’s brother is in so much danger.

This issue felt so quick. For Ananke to collect everyone’s heads, imprison Cass and the Norns, set up Woden, etc., that took a long time in this series. But in one issue: we rescue Cass and the Norns, find the heads, flee Minerva’s grasp, go to Baphomet, and then convince him to put Inanna’s, Lucifer’s, and Mimir’s heads on the Morrigan’s dead bodies. All done in one issue.

I thought it was funny how as soon as she could speak, Lucifer pointed out that Minerva and Ananke were the same person.

Baphomet was ready for some genuinely goth shit where he’d kill himself to bring the Morrigan back and then trust that she’d kill herself to bring him back. Wow. Romance with a capital “R” is terrible. Also, she did abuse him.

Laura kind of still has powers but doesn’t completely. I assume they will fail at a critical point.

I don’t know why they need to have Baal onboard. I assume that an alive Inanna will now help to convince him to believe in something else. Am curious to see what Cass divines when going after the Great Darkness. We are so close to the end.

I suppose it would make sense that Nergal would kill himself to save Dio. Dio who is too pure to live, and he’s probably one of the most powerful amongst them when it comes to defeating Aneke’s machine. Hopefully, after they kill Aneke/Minerva, he will then be able to control his powers enough to get some sleepy time.

My favorite art in this issue was McKelvie drawing Nergal’s eyes.

Woden dying felt very satisfying. Of course, he also could be a head. He would be a very annoying head to keep around. Woden made some classic mistakes he could’ve avoided if he’d watched some movies.

I want to go back and read the 1800s special. I don’t remember what Inanna was hiding. But that poor Valkyrie. While it was a swift thread to wrap up, it was a smart one and a significant distraction for Aneke to push through.

I’m not sure that I needed Aneke explaining how her consciousness was split between two bodies when Minerva was born. Maybe about ten issues ago I would’ve needed that extra help. I do wonder whatever happened to her sister. Seemed a bit clunky for Gillen, or at least “let’s get this good and done.”

Welp, I don’t see Baal lasting very long since he found out he was sacrificing those babies for no goddamn reason. He has too much of a conscious. I suppose you need a fighter who isn’t scared of death — though one who is ready to fall on the sword can be a sloppy fighter when that’s their end goal. I am glad that he was able to save his mother and siblings.