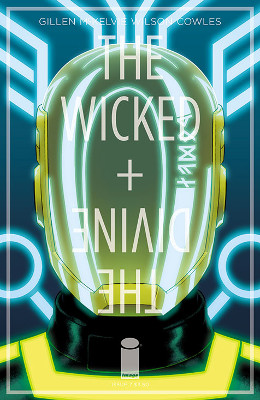 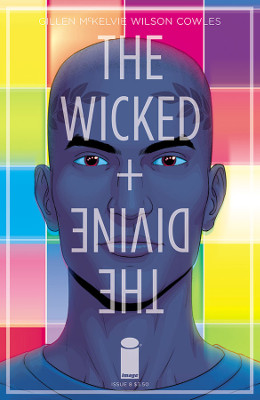 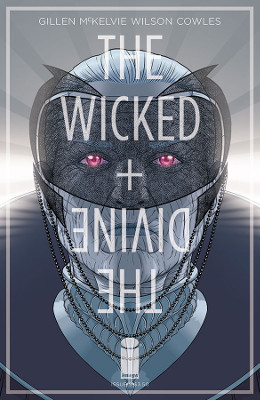 The Wicked + the Divine #7 by Kieron Gillen
Art: Jamie McKelvie

So damn good. I continue to love this book a lot. This issue hones right into Laura and who she is as a character. Her point of view has gotten just that much stronger. She clearly has her own mission to discover who was behind Luci’s attack and ultimate death. I love Laura’s slightly adjusted look in order to show her new understanding of self and confidence.

Laura’s just a little in love with Inanna. But it doesn’t have the same spark and awe as when she was in love with Luci. The softness of Inanna seems like a safer place after Luci’s death. Of course, Laura going down into the subways with Baphomet to visit the Morrigan speaks that she also needs some reckless time.

Cassandra continues to be awesome. I adore her.

Dionysus is definitely going to be an interesting character in terms of fandom.

The Wicked + the Divine #8 by Kieron Gillen
Art: Jamie McKelvie

This Dionysus no music dance party reminded me a lot of Phonogram. It wasn’t bad; it was just somewhat of a different tone, even if those two books are technically set in the same universe.

The drug-like nature of Dionysus’ powers, and even him comparing himself to a tree frog, made it feel a bit like a different book. Of course, Laura’s been a part of the story, not just a fan, and we haven’t seen her indulge in fandom really since the first issue at Amaterasu’s concert.

I do find it interesting to see Cassandra affected for a short time and that the other gods reveal too in Dionysus. The ending where Dionysus explains how he hasn’t slept since getting his powers was amazing.

While this issue didn’t strike me, I do bet that it has lots of clues as to Luci and her ending. That the pantheon are saying a lot more than they seem to be and that there are strong clues that will be extra obvious in issues to come.

On a side note, I’m so looking forward to the single issues that dive into the lives of the pantheon from their points of view. (Or maybe Laura’s, but really focus on one character and their origin.)

The Wicked + the Divine #9 by Kieron Gillen
Art: Jamie McKelvie

OMG, that twist! I did not see it coming at all, and it was amazing. Oh, Cassandra. I’d have guessed that she was too old to be called to godhood, but I guess not.

I also have to wonder what will happen to Cassandra’s assistants who became the other two aspects of Urdr. Do they also die? That would mean there are more than 12 lives sacrificed.

I love that Cassandra is still planning on tearing down the pantheon. Even though she’s now one of them. Of course, there’s a time limit to her ability to do so.

Loved Ananke’s scene with Minerva so much. She’s so very right that Minerva is so young and able to sway to a bad influence without a guiding hand. Though who knows if Ananke’s hand is the correct one.

Ananke sharing her own story was so interesting. I’m really hoping that there will a single issue focused on her and her life. Giving up her godhood for a mortal plane must be lonely.

Interesting that everyone’s classifying Baphomet as not a god. What will that mean as the story goes on?

Is Laura crying because she wasn’t selected as the 12th god? Or is it because of what happened with Cassandra and now she doesn’t have any allies?

Follow the gods on their journeys, and buy The Wicked + The Divine Volume 2: Fandemonium