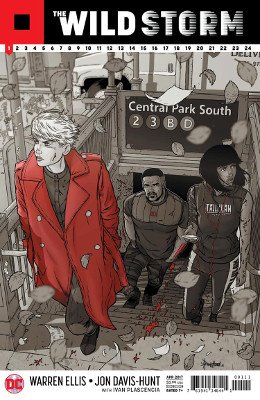 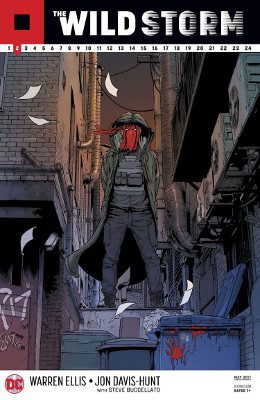 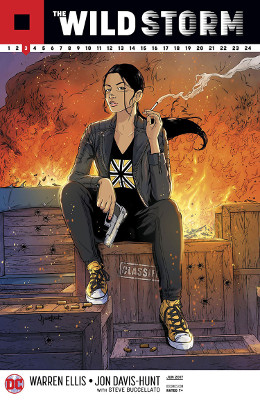 We’re tossed into the middle of the story. I guess that’s alright because it’s not like Ellis is going to tell this from the beginning. Even though in his newsletter, he writes about how Jim Lee had him create a ton of backstory work for the universe. Or the reimagined universe. I assume this is because DC maybe finally decided Wild Storm didn’t fit into the DCU. Or at least they should be kept on their own earth. Though I will take a Midnighter and Nightwing team-up written by Steve Orlando any day.

The more of Davis-Hunt’s art I see, the more I really like it. He is a great fit here for the kind of bleak and crisp world that is Wild Storm. For the kind of gory tales told. Some widescreen action shots, the style that Ellis had his artists use in other Wild Storm comics.

Angela is, of course, a standout here. As much as I love Ellis’ work on the other characters, Angela is his baby. I’m so happy for her new badass look as the Engineer and how she doesn’t look like a shiny silver sex doll anymore. Angela looks fierce and functional.

I am curious who this book is written for. Will it try to bring in new fans? I’m not sure this issue would get new fans excited. Maybe the bit about Angela. Or are we just assuming it will coast on Wild Storm fans who still want good books and have fond memories of when Ellis wrote them? I suppose there will be more answers to this in issue two.

We haven’t met Skywatch after all.

My only criticism is that I needed everyone to wear nametags as we meet people without any introductions.

Angie, at the beginning of this, just…guh. It sold me on the entire issue. It sold me on the idea that this reboot might not turn into a heaping trash fire that has been too much of the content from this universe. Angie. This book can just be about her, and I’d be fine with that.

Never have been a big Grifter (Cole Cash) fan. But I’m happy to see that Davis-Hunt gave him a wardrobe and style update to where he looks like he lives in 2017, not 1995 comic books.

Apparently, Kenesha is Zealot’s daughter. So we’re going to see them go head-to-head? Is that where this story is going?

Oh, Skywatch. Henry Bendix had less tech implanted in his brain (at least showing) than he has in past incarnations. Maybe this is Bendix the young. Bendix the foolish. I do like how he doesn’t need to say anything to be scary. Davis-Hunt always knows how to draw the scary.

Mike needs a lot of friends and not so much his current life. Ellis always knows how to make his characters, well, more human. And more fragile than in other books about people with superpowers or super enhancements.

This issue was very explosive, but I wasn’t sure exactly what to make of it. Certainly an interesting way to introduce Jenny. Oh, Jenny, I appreciate that she’s already her own rogue agency. Though she’s not as close as she is far away. Is she Sparks or Quantum? Is Ellis telling us that they are the same, especially since we really never had a grown up Quantum, who’d be 17 now?

Also, A Wild Cat. Har har har. Oh, Ellis, I see what you are doing there.

Cole gets his fight that he’s been wanting. Same with Kenesha. I do wonder if Adrianna will be able to recover from the piece of glass in the side of her head. She seems more machine than human.

Angie just flies away from it all. As she very much should. She needs to meet Jenny.