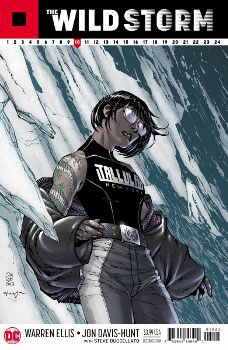 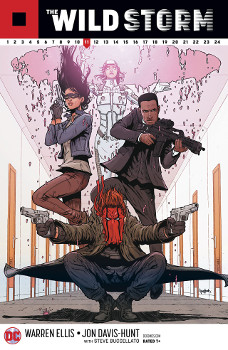 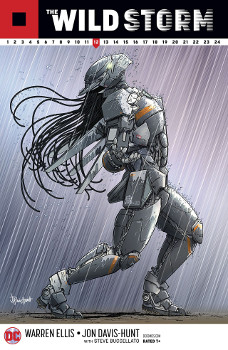 I’m 100% in on having Jenny and the Doctor meet. I rather love this version of the Doctor and who we’re seeing her as. I like her as a bit more wise than previously versions we’ve seen, and a bit more functional.

I cannot recall if the Daemons and the big lizards from space are the same thing. The Doctor seems to think that they are. (They are!) The thing Jenny was born in is what John Colt as samurai snagged last issue.

Lauren Pennington is great. There are just so many great women in suits in this book. There’s a lot of wonderful women characters here, and it makes me just happy to read them. Of course, they are all messed up too, but this is an Ellis book, and hey, I hear if you write women like people, they are messed up like people are.

Not surprised to see Bendix shooting himself up with some kind of drug in order to function fully. Or to rule all of space. I want Lauren to have her space castle vacation home on Mars.

Is the war with the daemons lizards, or just IO and Skywatch after each other? After all, history has proved that humans do know how to kill each other very well.

Angie’s self-projection screen was a delight. Again, loving the rethinking Ellis and Davis-Hunt are putting into what these characters can do and making them different than before. Same with “The Mayor.”

Oh, hi, that opening page is worth the five stars. The Wonder Woman comforter and sheets and the pride flag rug, I want for my own space. Also, I approve of the Doctor and Jenny hooking up and forming the Authority, or what will become the Authority. (Which frankly, was always the part of WildStorm I was most invested in.)

Loved seeing Angie solve her own damn medical and technology programs. And her talking herself through the pain and disorientation. Nice to see it mostly moving into the disorientation category instead of pain. Sometimes I don’t need the hyperrealism of someone morphing into a werewolf or Wolverine’s claws cutting his own hands.

Did Keith actually remove that cell phone? Or is everything we are seeing here a red herring?

Bendix is the worst boss, but the most fun to read about in a book. Lauren continues to reign in her spacesuit Queen of Mars look. Love her referring to Bendix’s stories as “story time with Creepy Uncle Henry.”

Davis-Hunt’s art was so pretty in black and white. I love the choices around the ships and the buildings to make them 90s and X-Files-y. Now I want the crossover where Bendix messes with Mulder and Scully for fun on his coffee breaks.

I don’t know much about Lucy and Cash’s connection.

Jackie’s drawing Bendix in their plan to go after Skywatch reminds me so much of Giles’ drawings of the Gentlemen in the Buffy episode “Hush.” Love it.

Kenesha talking smack talk to Cole always makes my day. He is a terrible person. “Expoldy” is a very good word, and it’s another reminder of Buffy in this book.

No one was worried that the Cats wouldn’t do their mission in Hightower. No, the stakes in this book were the hacking. Which as Jackie stated, is typically pretty dang boring work. However, Ellis delivered the right kind of tension and pacing to actually make it interesting.

Of course, Bendix would turn North Korea into a luxury resort if he were running IO. That’s why it’s good he has to be secretive. Bendix out in the open is even more dangerous.

I’m going to assume the fellow at the end with the dead wolf on his kitchen counter is John Lynch.