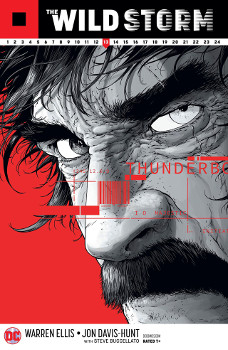 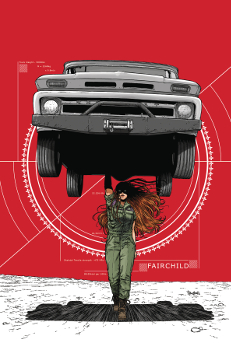 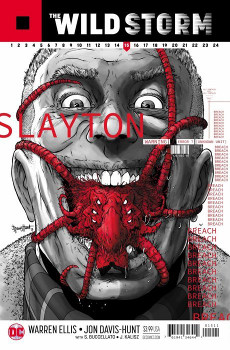 I guess I kind of don’t care about John Lynch or Thunderbook. But at least we do not have a mystery around what the program was. It was about taking the alien DNA from the lizard daemons and putting it in humans. Of course, it went really badly.

Marc’s house was so easy to pin him as a serial killer, and as someone who was murdering humans. That was way obvious before John even asked him about it. Of course, neither of them died, so they’ll both be in future books.

I am more curious about John Colt, Marlow, Voodoo, and all the rest of the Khera. Though I am sad about John Colt taking off his hot human suit to his Khera self beneath it.

I’m also not sure about old spy versus old general. Sometimes I think Ellis writes Bendix like a very evil version of himself (or his public persona). Or at least a very narcissistic one.

If there’s a war happening, we’ll need the bodies, which means there are about a zillion characters who are going to be introduced in the next couple issues I’m betting. Need more redshirts.

I’m still not sure where Lucy’s loyalties are. Especially if Bendix believes the existence of the lizard aliens to be unconfirmed and a myth. Though it’s hard to believe he doesn’t know she’s somehow special when she can take out an entire IO office by herself. And not to mention the modified Skywatch agent killed by Marc at this issue’s end.

While I’m interested in seeing where this story goes, it is hard for me to care a lot about what’s happening when I don’t care about the characters. We meet Alexandra, another Thunderbook solider experimented on by John and IO. What’s most interesting about her story — beyond that she’s done a better job than Marc at suppressing the alien rage influence — is that she had a daughter post-experimentation and gave her up for adoption. I have a feeling we’ll be meeting her daughter at some point.

Obviously, Marlow, John Colt, Lucy, Ken, etc., have control over themselves. They may not value human life in the same way — and you can argue that, even in real life, the humans who value life do so because of how we were raised — but they don’t seem to have predatory urges to kill the way wild animals do. I suppose there could something else going on like programming, either a large mission they are being called for or something about the original tech put in them.

I do love how this Doctor is just ready to fix everything. She’s getting straight to the point with giving Jack Hawksmoore his identity back.

This carries that inevitable feeling that the last issue wore too. It makes it less interesting. Of course, Bendix would go ahead and drop a diamond nuke onto one of IO’s main buildings. And yes, next time, he isn’t going to avoid population centers.

Lucy knows that she’s being put on ice, and that isn’t going to work out for Skywatch.

Jackie is raving mad. Miles is right, however, that Mitch should’ve never tired to have some kind of life that was easy to hack. They are supposed to be spies, and this was an easy way to take out an agent. This wasn’t even hard for them to do. It is nice that she figured out that their hacking is still invisible, and now they know where Skywatch is in the stars.

I love this explanation for why Jack exists and why he’s the king of cities. He can live in dead cities. Jack can live in places where humans cannot because humans are destroying the planet. This is also the right amount of pain to add to the book.

John really has an amazing amount of control over his own alien DNA as he kills Andy and everyone else in that bar. It is interesting how the Thunderbook experiments do go out in the world and breed. John is right about that.