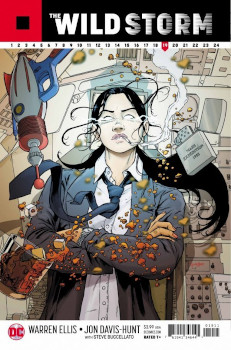 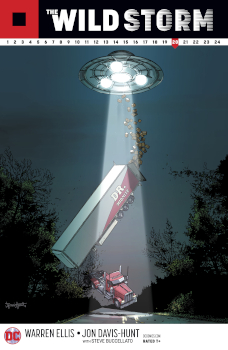 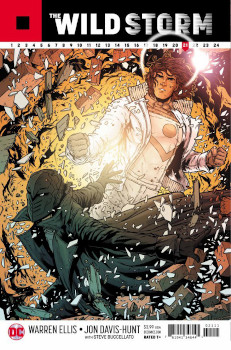 I love the directive to Shen from the other Doctors that combat medics fight back: a powerful ending place for the start of a big war, or a possible end times.

The scene with Shen, Jenny, Angie, and Jack all drunk and passed out naked in Shen’s bed was perfect Authority. So freaking perfect. I love this book.

Davis-Hunt is such a talented artist when conveying mythologies and broad concepts. He’s so crisp in how his art cuts directly to the point. There aren’t excessive panels. The details are there, but not distracting. Every inch of the canvas is used so smartly, and beautifully too. Buccellato’s colors shine here.

I like that not even the long players — like Marlow — know everything about the Daemons, or understand what’s truly happening. I agree with the Doctors that Marlow does not have enough of a presence or enough control to create a third option with Earth. One which will seemingly still destroy Earth. How do the Khera even know that they will end up in some heaven? That’s a lot for their faith to ride on, and I appreciate how Ellis refers to it as a religion, not as a scientific fact.

It also makes Bendix seem somewhat smaller in his villainy.

I love grumpy Midnighter and the always loving and confident Andrew. The recounting of how much IO property and personnel Midnighter has destroyed or killed was excellent. I’m also happy that Davis-Hunt knows how to draw some sexy men. His style has evolved over the last couple of years to make it a great fit for The Wild Storm.

I approve of any issue that features Midnighter and Apollo decimating all the fascists and not playing anyone’s games. This is the best. They are the most adorable and my favorite. I’m glad to see Midnighter on his killing game and Apollo having some explosions.

Especially when the organizations know it’s them.

Of course, Jenny snuck herself onto Skywatch. She’s always been the character to take on Bendix because that’s who she is. Even if she’s pants-less. (Humor, it breaks up the tension.)

Miles is going to clean the house. Clean house in a bad way. Jackie better see him coming, that’s all I’m saying.

Davis-Hunt’s layouts shine in all the action sequences. This is some of my favorite work that he’s done. Of course, it helps that I love Midnighter and Apollo so much. But the scenes are incredible and the flow of the layouts are stunning.

I love these dumb-dumbs making plans to stop the fascist in space and save humanity from being blown up and enslaved by either Skywatch or IO. It makes me terribly sad that DC decided to be done with Ellis’ re-re-launch of this universe. Especially since they’ve never otherwise shown that they have any interest in really investing in creative teams for them.

This reimagining of Midnighter and Apollo could be so compelling, given that they have alien DNA in them. The DNA that eventually took over and controlled the Thunderbook crew. That turned them all into monsters and killers — with the need to spread their DNA.

The early fight and argument between Angie and Jenny was great. Jenny was asserting her dominance, and in many ways, her age. They forget that she has more experience — outside of Shen — than all of them. Jenny’s anger and her tears are all about how she neglected her duty.

I do want to know who Ivana called after Miles gave her order that signaled he was ready to kill her (and Jackie). For a spy, he’s not very good at subterfuge. I kind of hope it was Jackie on the other end, and Jackie is arming herself. She’s nobody’s fool.

Lauren and her dreams of being a space queen are fabulous. Her reveal to Bendix of her character and how much she’s been changed by working with him was great. Lauren’s look in the slim white suit with a skinny tie worked well. She’s both business, but also not playing by the rules.

Apollo and Midnighter are the cutest. Just put them in my pocket forever.

Jack saying that his world isn’t any less bananas than it was when he’d lost his mind was great. Also, another one who might have to deal with the monster inside. Shen and Angie communicating via mind technology — which seems like solid groundwork for future communication needs — and the double joke of “that’s a crappy way to talk to someone you just had sex with” was fun and cool.

Jenny’s ending about the people in power living on paranoia and fear of everyone and everything was just incredible and to real.