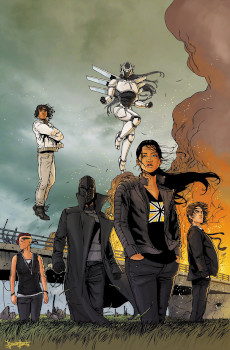 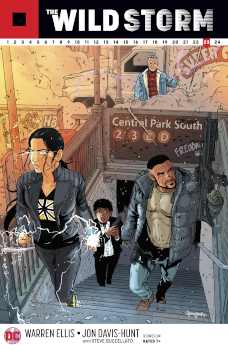 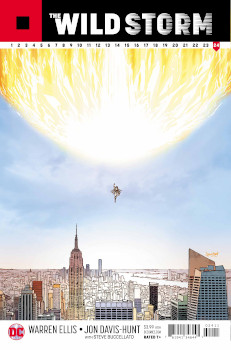 Public transit is always running behind. Though perhaps this one was on purpose. I am so Jackie, where I got my backup bus routes if one’s late. That armor indeed came in handy for her.

Giant Jenny will take everything down. I like the explanation of her (and the Doctor) as Earth’s defense systems.

I hate to say it, but Shen is right that Apollo and Midnighter would’ve been destroyed going into this battle alone. I like how Bendix reads them all — and while he’s right, he’s also wrong in so many other ways. Jenny isn’t using some simple face filter.

These dorky UFOs are so entertaining. Though the other ships look more menacing with far more firepower.

I’m nervous about this ending in one issue, especially since the series isn’t getting extended. What I’ve wanted through all of this is an Authority series, and one with a guaranteed 24 comic books. Because Ellis got the space to rebuild this universe, he could tell a long game story over two years. There wasn’t a rush to simplify the plot, break the universe into shortcuts, or cut off characterization in favor of plot.

The moments that are my favorite are these deeper ones:

• Davis-Hunt’s smart art in the download of “what’s happening” to Apollo’s and Midnighter’s brains. The use of the cover structure was brilliant.

• The jokes about sex being the first questions Apollo and Midnighter have, their establishing of their boundaries, and Jenny’s frustration that they’re distracted to the wrong thing. “Is this a sex cult?” though, it is probably a real question.

• What it could mean that Apollo and Midnighter have their identities downloaded in their brains, and we don’t have to go on an adventure to discover who they really are. (Too many comic book plots these days seem to rely on this ‘who am I?’ trope.)

• Jackie showing up not dead at IO headquarters to Miles’ surprise.

• Bendix being upset and ready to murder, but also not understanding who Jenny or the Doctor are. He was so “all-knowing” in previous Wild Storm books that I find this take more interesting.

But, of course, here we are. We know the future, and we understand how it cannot be resolved.

The thing that makes me most frustrated with this ending is that, when reading this in single issues, there’s an advertisement for Wildcats, a new limited six-issue series from Warren Ellis coming soon. DC canceled that. Ellis had even already written many of the issues.

This is such a satisfying end for Jackie. Of course, she had to kill Miles. He was part of the system, and Jackie understands how the system works when otherwise playing these power wars. Both Miles and Baiul played a game of one-upmanship, and that’s why they both lost to someone playing the system. I appreciated Jackie and Jenny’s interactions.

Bendix threw a fit from space, and being exposed is Bendix’s greatest weakness. He’s someone who can only play in the shadows. Light is what kills his operation.

I loved Angie so much in this. She’s found her calling and her mission. Angie’s made a difference in a world, and in a way, she didn’t think it was possible.

The book ties up both John and Michael Cray very neatly. Though I don’t know if Miles’ bullet actually would’ve taken out Cray. Though there are still a lot of people out there with alien DNA, and while some of them came to NYC under mind control and were taken out by the Authority, we also know that those original subjects had children.

Excellent callback to the beginning when Miles’ husband Julian recognizes who Angie has become.

The moment where Apollo and Midnighter call each other by their birth names but find their codes names better was excellent on so many levels and is so dang queer. Even though Ellis is a straight and cisgender man, he did do an excellent job at making an incredibly queer book.

Davis-Hunt’s art of Angie flying into the atmosphere to stop the diamond bomb was beautiful. Buccellato’s and Kalisz’s colors added a ton to this. I hope I’ll soon be able to read another book with Davis-Hunt’s pencils.

The summation of Jenny, in the end, about Angela’s journey harkens back to the first issue of this series, where it was clear whose hero journey this ultimately was: Angie’s.