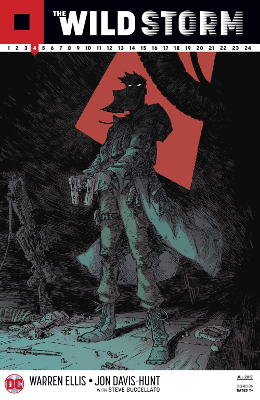 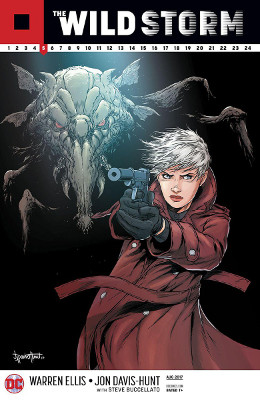 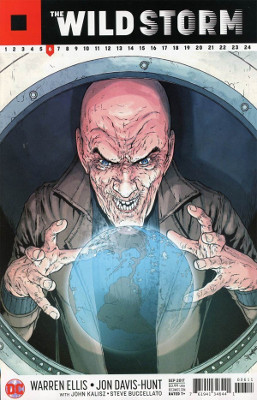 I feel like Ellis was just waiting to dive more into Henry Bendix as a character. In the other books, he was always the supervillain or the scary boss. I love how Ellis makes him the most insufferable old man ever. He’s like if your racist uncle was actually smart and in charge of the world.

I love how Ellis writes and Davis-Hunt draws the private Bendix. The Bendix who cannot stand straight without pain. The Bendix who is old. The Bendix whose only “friend” is his assistant Lauren. Lauren who has more powers traditionally than we see here. Bendix who likes the smell of mint and the view of the stars.

Angie seems as lost as ever. She seems even more pitiful when you discover that her machine parts essentially ooze from her pores. There’s no Bioré strip that can fix that.

Miles and Julian’s conversation was a nice way to do lots of exposition. I do hope that this helps new and old Wildstorm fans. Julian’s description of how Bendix looked at him made me crack up; and probably was so very true. One change in this universe that I appreciate is the even more human take on the characters. Though I’ll be curious to see how much that will be used at plot leverage as the stakes are upped. Here, everything seems relatively mellow.

Though I’m still not sure what to think of Cole, Kenesha, and Adrianna. Perhaps there will be some exposition about them in the next issue.

Davis-Hunt’s pencil and the widescreen layouts continue to work so well in this book. My favorites were the desolate ending with Angie and the stuff in Bendix’s quarters/meeting room.

One thing I wonder about this Earth — do our characters largely not have superpowers? Most of the Wildstorm characters got powers from radiation due to a comet passing close to Earth. I believe all the ones we’ve seen who have powers are ones who got their powers outside that structure.

Christine! Christine Trelane! Yes, Mike, go with her. Seriously, this issue is all the heart strings for Mike. He’s getting screwed over by Miles because he knows Angie isn’t a threat and he knows she actually very scared. Though maybe it is the brain tumor that’s developing more empathy in Mike because he’s been an assassin for a long time.

Adrianna’s explanation of her powers packs so much information about this universe into one tiny scene. This means Bendix hasn’t found the ship that the Authority use. They can’t get into the Bleed yet. But they know it’s there.

We saw a character I swore up and down was Jenny. But with Angie being so lost and how she got her powers, I do wonder if this universe will have archetypes like before.

I’d kinda forgotten about demons in this universe. Always less than impressed. Of course, I haven’t read a ton of the books with Zealot or Voodoo, who seem like they are both big players in this reboot.

This is a great issue. Mostly because Davis-Hunt’s art is off-the-hook. The layouts were incredible for movement and storytelling. It feels like Ellis and Davis-Hunt have really hit their stride working together.

Michael’s fight with the wetworks team was brilliant. The layout incredible. The scenes, just enough to show the action, violence, death, and blood. This is exactly what sequential storytelling with pictures is about.

I can’t say that I’m surprised Christine works at Skywatch. She always does. Though I don’t know if she can actually get Michael healthy.

The part with Henry is brilliant. Also Ellis just making him essentially a cranky old man. He’s completely evil, however, he doesn’t seem to have sold his soul to ultimate power yet. Which makes for a more interesting story.

Angie still needs a hug, and I assume that Jenny is the one putting the chart together.

While I want to know more about this world, I just don’t trust DC long-term. They’ll do a great restart. Hell, Ellis has done this before with Wildstorm. Then lesser writers take over because they’re cheap and this isn’t Batman. And a fancy reboot will come along when sales are low. We’ve been here before.