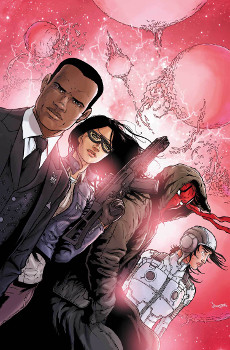 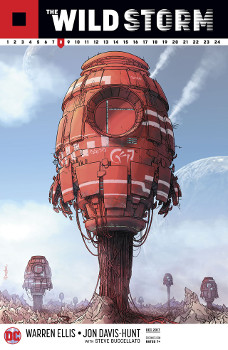 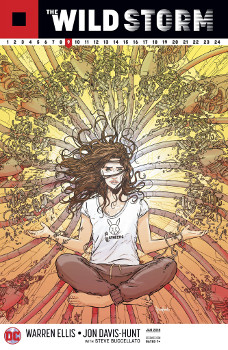 Oh, Jacklyn King, she isn’t going to put up with anything. Especially anything from Miles. It’s kind of amusing to see her as the “middle manger” who actually gets everything done. She just really needs her coffee.

Streaky is the best. And the greatest monster in history.

Of course, Cash walks around in his shorts and an open button-down shirt. And sits in a room with bright red walls. It all fits.

Angie better get her side fixed and something more than just Marlowe’s story. Though I do want to know more. Especially since I’m sure it will involve Skywatch.

I’m not really sure what to think of John, but he does round out the team. I do want us to sit with these characters. I have a leg up since I’ve read the other comics, however, I want to know more about everyone as they are now.

This book is too confusing when you set it down for any period of time. Which is what I made the mistake of doing. Though on one hand, I guess I can choose to go through a blitz of The Wild Storm at any moment.

I was right about that being Jenny Sparks. Or Jenny Mei Sparks in this case. I’m kind of glad Ellis in the long run went with “Sparks” because it makes sense for what her powers are more than “Jenny.” (Even if, yes, we get both here.)

So we’re going to be fighting the demons. Also, I know Davis-Hunt also drew the Clean Room, but these seriously look like the demons from that series and Evi kind of looks like Astrid. I cannot be the only fan linking the two. (Also that series definitely seems like it would fit right into the Wildstorm universe.)

This was a nice sleight of hand introduction to the Doctor, her powers, and the garden of the past Doctors.

Jacklyn still struggles to figure out up from down from the middle part of the organization. And she just passed a bunch of responsibility down to Mitch. Sure, that doesn’t seem like it’s going to work.

The story Angie is told about Marlowe already seemed like a modified version of the truth before that was pointed out explicitly. For the Engineer, Angie sure doesn’t ask enough questions. I suppose Marlowe’s crew just did save her life and possibly she’s trying not to look a gift horse in the face.

I continue to have absolutely no clue what’s going on here, and yes, I put this book down for even longer. Maybe I’ll be caught up somewhere in 2020? Maybe before the election?

Did Angie shoot Marlowe? Or try to shoot him? Or was the space gun just not a space gun like it looked like?

I love Davis-Hunt’s art with our swordsman. Those are some moves, and just the right amount of violence and blood that I like in my Wildstorm books. He’s also a very attractive gentleman, so that’s never bad.

Jackie yelling at Mitch though, that was the very best. Dude might as well wear a red shirt. He doesn’t know how to go off-the-grid, and those dates are going to bite him in the butt and I cannot wait. Well, Jackie tried to be a good boss. She tried to warn him.