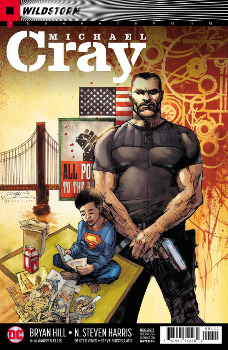 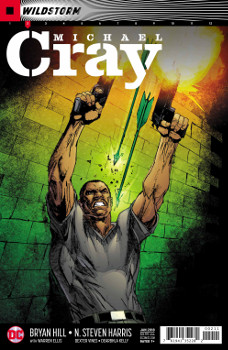 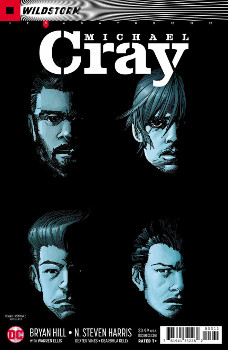 I’m quite unsure how I feel about this book. It’s not quite charismatic me or drawing me in as the main series, The Wild Storm. But I am interested in the larger Wild Storm world. I find it very interesting that the first book they are spinning off is Michael Cray. (Of course, I’m far, far behind on this series, which is still in my to-read pile.)

I’d like them to address Michael’s illness and what is happening to his body. There was a little bit here and there, however, his job requires him to use his body and it seems absurd that there wasn’t more about it here.

Not sure what I think about an ethical branch of Skywatch. Christine is a good character, who is good, which is kind of the problem when she doesn’t leave being under Bendix’s thumb.

Michael’s father and their relationship is real weird. We will see where this goes. I don’t think I quite understood their entire dynamics, except on a very basic daddy-issues level.

Oliver Queen as a bad guy with severe issues is fine with me. Makes me wonder if this is the plan for all of our normal heroes in DC’s regular verses. It’s interesting how they are playing with the line between comics and the Arrow TV show.

Harris’ art work isn’t great. It’s very simple, but not seemingly a stylistic choice. There are problems with the understanding of angles whenever someone turns their head.

Called it that this book would be one where Michael Cray goes assassin on all the major DCU superheroes. Who are baddies. Well, we’ll see about that one. Oliver Queen is an easy superhero to see turned evil. And starting Michael on the evil ones will make it easier for him to continue to believe whatever Christine tells him about future assassination assignments.

I really loved how Michael interacts with his team and how he sees them. I’m looking forward to more of this in this book. Same with him and Christine and their give-and-take. And Dr. Shahi, more of her please.

What I’m not as keen on is the art. In some scenes, Harris’ pencils were extremely light to the touch, and in other places extremely detailed — like Oliver’s beard texture, or making Michael look dirty and like a stereotypical homeless person. But then Oliver’s sister and Christine looked exactly the same. There was just a weird elongation of Christine’s chin to make them appear to be slightly different people.

I do kind of wish it was any Flash, but Barry.

So Michael is collecting trophies from the super-powered (or otherwise) people he’s killing? I’m not really sure what was happening this issue. Apparently, however, he already taken out Wonder Woman from those gauntlets. It seems odd that he’d go from “I don’t know if I should be killing these people” to collecting trophies like he’s a serial killer.

Is Michael supposed to be Dexter in the Wildstorm universe?

Barry looks like Eminem when he first got famous, but aged a tad. The styling could be greatly improved here.

What I also don’t understand is this cover. Is it a tribute to the Queen II album cover, but why?

I immediately take back what I said about wanting more scenes with Dr. Shahi in them. If we’re going to have some sexy dreams of Michael’s about his coworker, in order to get himself worked up, and then she can secretly see them: nope. On the other hand, this comic book illustrates why being able to read each other’s minds is beyond horrible. I just took a terribly composed sexual harassment training, and I wonder what it would say about this situation.