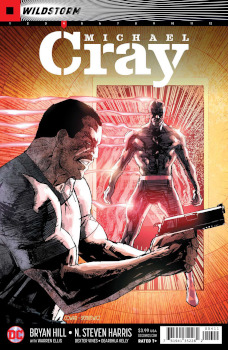 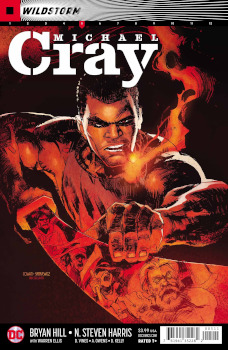 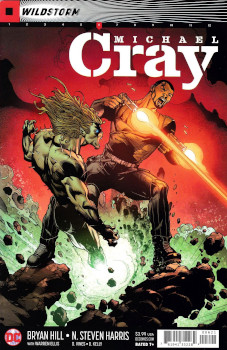 This book stuffers from inconsistent art and lack of time to create consistent art. It all feels rushed on the page, and the art team lineup shows a lot of extra hands were needed to produce this issue. Likewise, the writing felt light, and the art only contributed to that.

Not really getting to know Michael’s team is hurting this book. They are so slide-lined that the only one’s name I can remember is “Leon” due to the ending scene where Michael yells at him a bunch. Also, if Michael cannot control his powers — or the entity inside him as Dr. Shahi suggests — then how does he only destroy the gun, not kill Leon outright?

Yeah, I don’t think it was Barry who destroyed his data before Michael and his team killed Barry. Michael was right about how Barry was mentally ill, not outright evil, and Christine promised Michael someone outright evil to kill.

Will Aquaman be outright evil? Or will we just believe he is due to looking like a monster?

The combination of Harris and Hama on art in this book is improving the story flow. The layouts and motions were so great, especially with the sea, the sharks, and the fighting. It helped the reading enjoyment in the way that art should in a comic book.

With Christine’s explanation of Arthur, I do wonder if he can change between fish form and human form. Or if his modifications are self-inflicted or the genetic manipulation from his ancestors and their attempts to become gods.

This Arthur isn’t a steward of the sea since he’s giving the villagers expensive and likely endangered fish for them to sell and make their living. And apparently, a bunch of seafood because the art showed more than just those rare fish.

Michael is a soldier, but Leon really isn’t. It doesn’t bode well for Leon to be out there with great whites — their feeding ground must be the same every time given how great whites work — and for Michael to not like him.

I’m continuing to enjoy this art highly. The breakdowns really make the story flow, and it fits to create a unique look and style for this book. Which is essential as Michael begins to go more into his journey with the alien living inside of him.

Of course, Christine knows, and she may have to kill him.

There was no way Arther was going to come back alive, or that Michael was going to let Skywatch get their hands on whatever kind of genetic manipulation the Currys were doing. What a house of horrors!

Michael is always going to choose survival over dying, which is why this alien is going to come forth. The images of him in that cloak were powerful.

I don’t know what I think of this version of John Constantine. On the one hand, knowing you are going to hell could motivate you not to care, but on the other — a shaved head is not a good look. I have yet to see the intelligent part of his psychopathic nature.