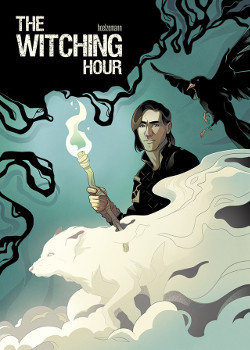 The oversized nature of this book makes me happy because Hoelzemann’s art is beautiful and her stories are fairy tales. Two friends, Gabriel and August, head back home through the forest, and encounter tests of character, specifically to avoid the fabled White Rider.

I don’t want to give too much away about this story. While August knows his way around a magical forest — my only complaint here is there’s not more of it. The story itself is rather short.

I wanted to know more about the wolf woman. I wanted to see more of August’s reaction to what she does when she discovers August and Gabriel in her home. I wanted him to connect with her and her ways more. Hoelzemann’s art was especially strong in the wolf woman’s house and in all the little details of who she was as expressed in her look, posture, and interior decorating.

And of course, I wanted to learn more about the White Rider.

I kickstarted this edition, and it featured a short-short “The Edge Effect,” which was lovely and showed off Hoelzemann’s art even more. I’m looking forward to reading more comics from her. She’s definitely someone whose work I’ll be watching.