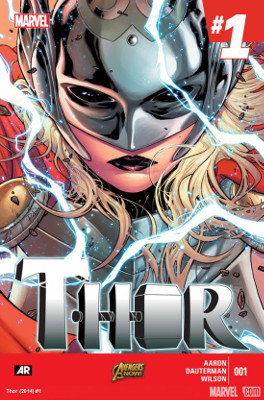 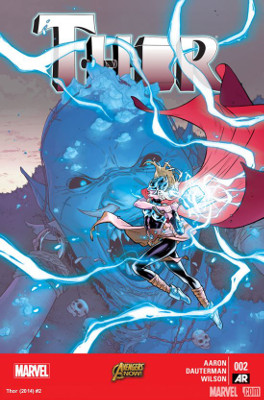 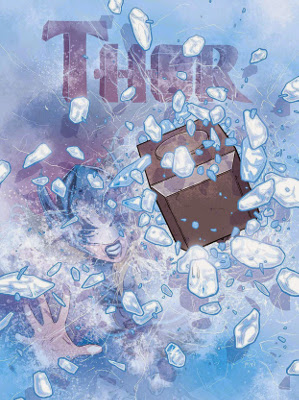 OMG, did you hear that Thor is a girl? I mean, grown ass women. As compared to the times he’s been a space horse guy and a frog. But at least they were boys. Or something.

Non-controversy aside, this was a pretty solid start to the story. Odin was an asshole so when he dies again, no one is crying. I’m seriously questioning why all the Warriors Three and Odin tried to lift Mjolnir, but Sif didn’t. I mean, clearly the new Thor is Freyja or an aspect of the All-Mother. Just saying, let’s give all the ladies a try.

Say what you will about the Thor movies, but they have greatly simplified trying to read a book about Thor or lady Thor.

Dark elves as so problematic. Malekith the Accursed already bores me. Also I was very distracted by trying to figure out how those Frost Giants a) breathed underwater (same with Thor) and b) didn’t automatically freeze all the water around them. Same with Thor’s ability to not only breathe underwater, but talk. I know, it’s a just a comic book!

Also, I’d probably freak out from claustrophobia if I even had to live and work in an deep underwater base.

Okay, this is getting really great. Oddly, this is the first book that I’ve read by Aaron, and I’m greatly digging it. I like that Thor’s hesitation is about her new powers and not really understanding how Mjolnir works.

Loved the haunting ice stairs that Thor climbs. That she sees the Asgard warriors and then the Avengers trapped, but alive, beneath the ice. I guess freeing them will come after she kicks some Frost Giant ass.

Oh, Roxxon, that evil energy company that’s always there when you need some villains. I would say human villains, but apparently minotaur Dario Agger is the CEO. He’s just locked himself in an elevator with Mjolnir, and if he could move it, that would be pretty big prize. Bigger than that dead Frost Giant King Laufey’s skull.

The Frost Giants’ speculation on whether or not Loki had turned Thor into a woman was pretty funny, and it fits the canon nicely. Can’t wait to see Thor kick Malekith’s butt as she figures out who she is: with or without Mjolnir.

Really hoping that we’d get some kind of reveal about how this new Thor is when she’s not going about wielding Mjolnir. I assume as Thor Odinson confronts her to get his hammer back, we’ll be finding out a bit more about her secret identity.

I liked her smart moves in order to make most of the Frost Giant army fall to its death, or at least underwater tomb, by punching a hole through the floor. Frost Giants’ size can definitely be a hinderance.

I don’t really care about Malekith or the fate of the Frost Giants, so that whole setup didn’t need to be that long. I think most people probably get that Frost Giants don’t like humans or Asguardians.

Smashing Laufey’s skull might’ve started a war, but it was pretty neat trick to shut everyone up.

I assume that if Thor Odinson’s awake then so are the rest of the Avengers to help clean up the mess.