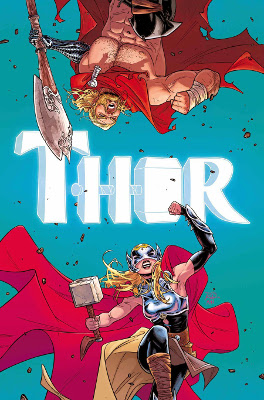 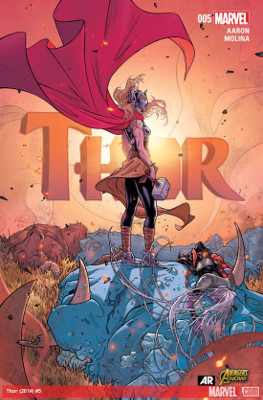 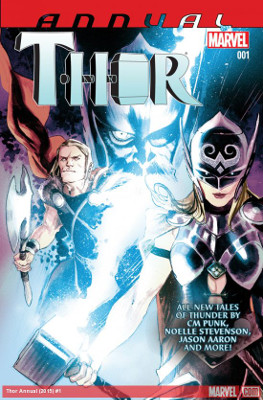 Thor Odinson is really freaking whiny in this book. His dad’s all like “don’t be a baby, Thor.” He’s all pissy that he lost his arm and his hammer and his axe. Maybe he should care more about his things.

Good thing this book is actually about female Thor. Who’s actually fighting off those Frost Giants. And I like how her response to Thor asking her if she’s his mother, causes her kiss him. Yeah, she better not be his mother.

Freya is, of course, off being a badass herself and leading an attack on the Frost Giants. Baller.

I guess I’ll be continuing to see where this book goes. I’m not entirely sold on it. Obviously, they’re going to need to reveal soon who Thor is.

I’m between a three and a two for rating this book. Truman’s art didn’t stick with me. I found it overdrawn and reminiscent of ’70s and ’80s fantasy art.

And while I get that King Thor (and Odin, for that matter) is the great white All-Father savior figure, the re-creation myth just didn’t do anything for me. I don’t actually care that Thor has angst over Midgard as it once was.

Frigg, Ellisiv, and Atli were only slightly entertaining. I couldn’t really keep track of which one was whom. But I guess when they’re supposed to represent the All-Mother, that’s what you get. They were very witchy.

This was a cute tale. I like how Thor kept insisting that she was Thor because Mjolnir chose her, and how she just did those tasks with the Warriors Three because she thought it would be fun. It also served to give them adventures together and create some kind of bond of friendship.

As always, Stevenson brought fun to the universe. Her characters are just so joyous and very much celebrate life. One of the many reasons why I enjoy her writing so much.

Of course, Thor wins over Fandral, Hogun, and Volstagg. My favorite was Thor waking up Queen Aelsa of the Elves and asking her for some of her hair. (Also, it was a little gay, which I highly approve of. Here’s a thread that I hope Aaron runs with in the main title.)

Perhaps drinking tales are just not ones that I’m interested in. While I can appreciate that Thor was once just a party guy, who wanted to smash things and drink a lot, but has grown as a character, it’s just not my thing.

I don’t really need to see a bunch of characters drunk off their asses and then barfing because of it. I would’ve gone to more parties in college had that been my thing.

Additionally, Loki here is just not that clever. Neither is Mephisto.

Though I kind of like it being implied that Mjolnir made Thor barf and pass out because he was just that unworthy.

I am getting a bit tired of the mystery to the reader over who Thor is. I’m fine with the other characters, such as Odinson and the Warriors Three and even Odin himself having no clue as her true nature. Aaron does well there with the clever guessing and funny answers. I’m always a fan of Sif getting angry at Odinson.

Absorbing Man and Titania were a bit ridiculous. But then, when aren’t they? I liked how pissed Titania got at him. And Absorbing Man was a clear stand-in for all the angry fanboys upset about Thor being a woman (and ignoring those three other comics featuring Odinson) and that this book is outselling the other Asgardian titles.

Molina’s art was great. I found the style very refreshing and complementary to the book itself.

Anytime Odin gets cranky and sloppy, there is always fun times ahead for Asgard. I like how the All-Mother snuck away to warn Thor about the coming problems. I can’t ever see what might go wrong when you put your evil brother in charge of justice.

Following around Thor’s journey in Thor Volume 1: Goddess of Thunder.