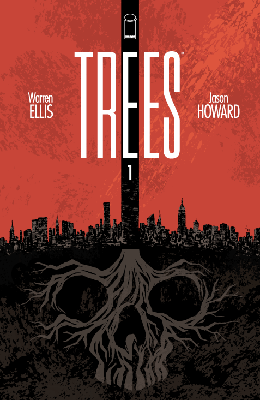 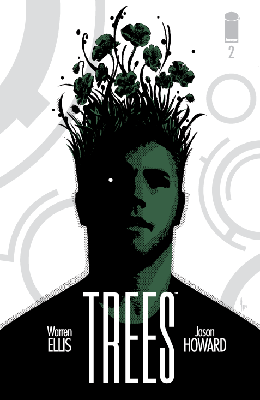 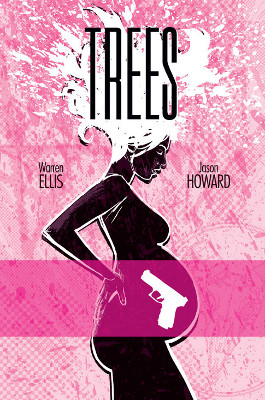 Unsurprising to be reading a book by Ellis where aliens come to Earth and don’t recognize human life to be intelligent enough to converse with. Seems about cynical enough when you then add in the factor that they’ve planted “trees” that grow taller than anything and in some cases, spew toxic waste into the ground and are surely going to rip the planet apart. (Or perhaps take a large chunk with it if ever removed.)

I enjoy that Ellis is writing a cross-cultural tale and showing the different types of impacts around the world: Rio, NYC, Spitzbergen, and Shu. Also, we see a range of people: poor and rich and artist and scientist. There’s also the cynical and hopelessly naive.

Looking forward to seeing where this goes.

And the mystery builds a little more. Seems like Ellis is going to give us a world tour, but also stick to a few places.

This issue was definitely about how the Trees have affected natural resources. In Somalia, they have changed the tides of war and resources, making some lands rich and others not. They also have the shortest Tree, which may mean it’s the most vulnerable to climb into and poke around.

The mysterious circle patterns rise again. And the old man in Italy stops drawing them only to fight with Eligia Gatti, who’s trying to get her boyfriend not to be a gangster, but she may be a little bit of one herself.

I like that Ellis seems to be hinging a lot of the early plot building on the scientists in Spitzbergen. On Marsh, who’s perhaps a little crazy, in that he hasn’t left the isolated station in a long while, and who’s also obsessed with the poppies that seem to be growing from the tree. I like that Sarah Allinson gives Marsh shit and that Nileen Siva’s the good shot and the one concerned about keeping the station tidy. Dr. Creasy’s got her work cut out for her.

This books continues to be fabulous.

I’m really excited to see more of Shu and from Tian Chenglei’s point-of-view. I bet he eventually starts drawing those circles. But for now, he’s a great character of innocence to see wonder with the Trees, instead of a science mystery, economic advantage, revolutions, political posturing, etc. I hope Zhen gets more character development.

I totally called Eligia being something on a gangster herself. Or at least someone who’s highly fed up with her life as it is. Tito is going to in a world of pain soon.

I like that Professor Luca Bongiorno strikes a bargain with Eligia. That he’s going to teach her how to disappear, but also probably some other things. Though Luca claims to want to mentor her because he’s become some kind of feminist in his old age, he is rather patronizing. Even if Eligia did bring a knife to a gunfight.

Find out about a Tree yourself and buy Trees Volume 1