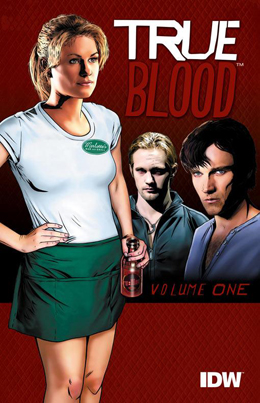 I’ve read all the Sookie Stackhouse books and watch True Blood, so buying the comic book was a no-brainer. However, I am often leery of TV-adapted comic books as sometimes they aren’t as well cared for and executed as one would hope. So I was pleasantly surprised when All Together Now turned out to be just as entertaining as the TV show and books.

When I first started reading, I wasn’t a huge fan of Messina’s art. However, as I got further into the book, I began to appreciate it more, especially as Messina varied his style in the flashbacks. And he chose an appropriate penciling technique to really bring out the emotions of each character in their unique flashback.

Note: There are a couple of spoilers for Season 4 of True Blood.

Ted, the trickster demon or imp shaloop, was a nice addition to evil. A type of creature we hadn’t seen, and one that would cost a pretty penny to put on television. I also liked that he wasn’t out for their blood or bodies, but for their memories. One of the great things Ball’s done with True Blood is flesh out the secondary characters from the novels and he gave them all dirty secrets. Ted was a great device to expose some of those secrets.

For the non-flashback parts, I love when Bill gets all noble and tries to rescue Sookie, only to get the beat down from Ted. Because Bill would do that. Same with Sam, especially when he shifts into a dog and launches himself at Ted’s teeth. And Eric snarking at them was awesome. Bud and Andy waiting outside and trying to shoot Ted’s force-field was a hilarious addition. I also liked that Jessica came when she sensed Bill was in trouble.

The saddest flashback was Sam’s. I wasn’t expecting a story about when he was a dog, and I would’ve never seen Sam getting captured by animal control, which was picking up dogs for experiments. Both Arthur being Sam’s first friend (and a dog) and then dying was so sad. I think it was the best showing of Sam’s personality, and how he might’ve had some bad guy days, but is, in his heart, a good person.

My other favorite stories were Eric’s affection for Rachel and Jason’s. Though I do think it’s interesting that True Blood likes to show the “human side” of Eric and how he’s always on the correct side of history (against the Inquisition, killing Nazis, etc.). I feel like Eric needs to be a Nixon supporter or something just to even it out. Or call Shakespeare a hack. Jason’s was a favorite because I read this before the episode where he was raped by the women of HotShot. Mostly I enjoyed Jason’s story because it was perfectly characterized and Messina’s art style was great here. Of course Jason would get raped by his high school teacher, and then only realize there was shame attached when his friend, the teacher’s son, caught them together.

As far as the rest of their stories, I didn’t feel like we weren’t learning something we didn’t already know about the characters or see on the show. Of course, Lafayette’s story was about Ruby, Tara’s about Lettie, Bill’s about how he killed a human he knew in his human life, and Sookie’s had to do with her last memories of her parents. I do think that at least Bill’s and Lafayette’s stories gave a little more insight to them compared to the others.

Overall, All Together Now is a great addition to the Bon Temps world. And if you’re a fan, this graphic novel is worth picking up. Buy True Blood Volume 1: All Together Now