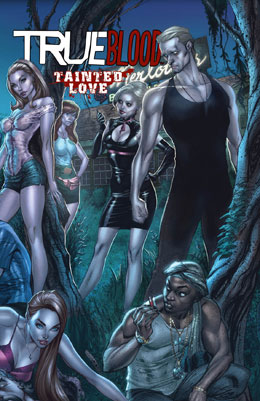 I’m really super confused at what timeline this story’s taking place in. Because the relationships people have with each other, they just don’t seem to match up. And if you’re appealing to die-hard True Blood fans, you better have your timelines straight.

Overall, I thought this was a pretty entertaining story. I’m glad that we got to know more about Jessica and her past, even if the story was very focused on the night that she was turned into a vampire by Bill. Though sexual assault? Gross.

Hoyt convincing everyone to throw a prom for Jessica was very sweet. And very Hoyt.

I’m kind of surprised that neither the show nor the books have had a plot about someone tainting the True Blood supply before. Seems like an obvious target for the vampire haters and Fellowship of the Sun.

Of course, Sookie’s going to make it her business. She always does. Though it did seem a little forced for her because usually Sookie’s pretty selfish. Technically, this doesn’t have anything to do with her. I loved Eric trying to seduce her after they’d been flying, and her telling him that she’s trying to concentrate on not vomiting.

There was not enough Pam in this comic.

Hasn’t anyone read any Batman comics and know that the bad guys always hang out at abandoned funhouses?

The art was really hit or miss. Sometimes the characters came through really well; other times, they were distorted and looked kind of like chipmunks. I do think that drawing characters who are on TV and based on actors must be one of the hardest tasks in comic books. Especially if you’re trying to do any stylization with the art. (Which I don’t think the artists were for this book.) There are many ways that say Captain America can look, but there’s really only one way that people now see Sookie Stackhouse.

I’m definitely going to keep reading these miniseries as they come out.