New Avengers: The Reunion #1 by Jim McCann, The Mighty Avengers #22 by Dan Slott, and The Authority Vol 5 #8 by Dan Abnett and Andy Lanning 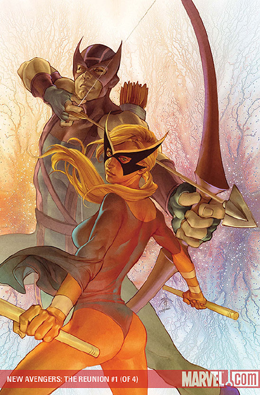 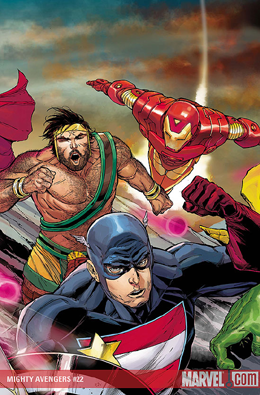 I bought this comic for two reasons: a) the cover at and b) it’s a comic that promises to be about Mockingbird. And let’s face it, I will probably try the comic if it features of a woman as the main character. I don’t know a lot about Mockingbird’s backstory, except for the basics: married to Clint, part of the West Coast Avengers, replaced by a Skrull, and presumed dead when that Skrull was killed.

I kept bouncing around as I read the issue over whether or not I liked this title. I wasn’t impressed with David Lopez’s art inside, except some of the depictions of Mockingbird. I thought Bucky was the worst, given that Lopez didn’t even draw enough detail to give Bucky his bionic arm.

Clint’s characterization kept bouncing around from the arrogance he had as Hawkeye and his determination to protect Bobbi to where his character is currently in canon. And maybe that was McCann showing how Bobbi brought up those old habits inside of Clint.

I did love the secret spy espionage feel of Bobbi’s mission, whatever it will be revealed to be. However, I felt like the story was pulling in two directions too much as currently Clint and Bobbi have a huge distance between them. Even though McCann brought up GPSs, cell phones, and Grey’s Anatomy to remind us and the characters how long Bobbi has been gone for. I loved, loved Bobbi’s secret hideout and her arsenal and the Emma Peel effect of her new costume. I’m curious to see how the next issue goes and hoping for some more back story about just what the heck happened to Mockingbird since she died all those years ago.

The Mighty Avengers #22 by Dan Slott

I think I’m suffering from a disconnect with this comic. The shift from Bendis to Slott is really noticeable as those two authors have very different writing styles. Bendis goes for the “dark” and adult writing with a hardcore team, whereas Slott is a lighter writer who likes to bring the funny and wacky, while creating a family-style team. I like both their styles, but I felt like going from one writer to the other, there was no transitional moment.

I’m happy to see Slott using some of my favorite side characters like Amadeus Cho, Bova, and Stature. And that Marvel has decided it’s time to tie up the loose ends of Quicksilver and Scarlet Witch. Hey, that’s exciting too. Oooh, and bringing Jarvis back is great.

I trust Slott enough that I’m interested to see where this title goes under his pen. It may bring back a lighter tone to the Avengers, but with two to five Avengers’ titles going on, that might not be a bad thing.

The Authority Vol 5 #8 by Dan Abnett and Andy Lanning

As much as I was amused by Midnighter as Vicar in this issue, I haven’t really gotten how this moves the plot forward. (The Authority beat up people trying to beat them up all the time.) I guess in some ways even seeing a bit of hyper-normal provides hope that the apocalypse can end. I did love the touch of Swift pouring the tea.

It does say a lot about Midnighter that he would get agitated and irritated even to have a week off the job. And curious that he wouldn’t have started knocking around heads for answers. Or you know, no one made a mention of Apollo. Just saying.

0 Replies to “Two Avengers and an Authority”