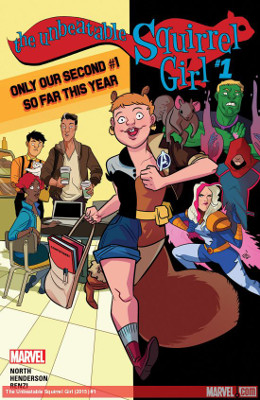 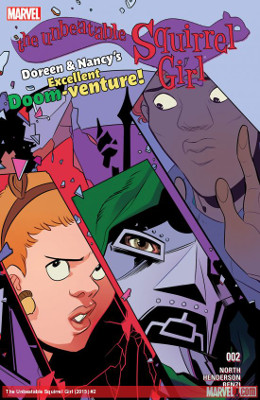 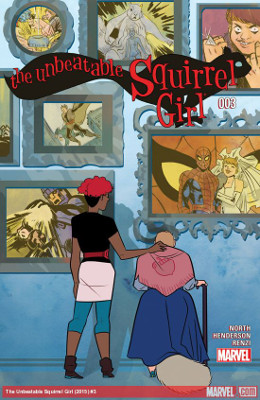 This book! So disappointing to see Marvel do dumb resets to attempt to sell more books, but I have to hand it to North and Henderson for nailing yet another issue #1! *tosses a bunch of confetti*

I love that they decided and ran with making them all second year college students. And they are doing second year things like moving off campus! And also all declaring computer science. (Well, maybe Koi Boi is still figuring out which direction he’s heading. That’s okay!)

OMG, Maureen is so adorable. I love how Nancy wants to know everything about Doreen’s childhood, especially the embarrassing photos. I kind of love how they chose to make her not a mutant. Now I want a tiny baby Doreen origin story about all the wacky adventures of her parents during Maureen’s pregnancy. (Or I just want the reveal to be that Dor is also part squirrel. Though the Spider-Man-like origin is also a pretty nifty idea with Maureen getting bit and the baby getting the powers. Or maybe blessed by squirrels for helping them, which seems more this comic.)

I continue to enjoy learning about words for butts and facts about squirrel brains. This will keep me reading your comic forever, North!

Once again, Doreen solves her problems with her brain. Or more like Maureen called her out on her violence, and the two young women computer science majors fixed up Brain Drain. And then got him into school. Best.

Adored Doreen taking all of her friends to the Avengers’ food court. While I’m not sure they would actually have a food court — nor do I know that much about Avengers’ Island given that I dropped most Marvel team titles — but I like the idea of it a lot.

This issue wasn’t my favorite, and perhaps it’s because part of what I love so much about Squirrel Girl is that she’s surrounded by friends. Her college student life brings a whole lot of fun to this book, and her being sent back in time just negates that. I do adore, however, that Nancy still remembers her. The power of friendship ftw!

(Also Koi Boy and Chipmunk Hunk being like ‘how does Nancy know?’ was pretty cute.)

It also seemed anticlimactic that we see Dr. Doom on the cover and “Domm-venture” when Doreen and Nancy spend a lot of this issue pondering just who sent her back in time. When she ran into Mary, I really wanted it to be a vast conspiracy to keep women out of programming and computer science. They actually get sent back in time!

Instead, it’s Doom. I’m interested to see how Doreen will tame Doom in her signature style. She does kick butts, but she also talks her way out of more problems.

Nancy dealing with Dr. Doom was hilarious. Especially how so many of the superheroes actually believed her that he was a great cosplay, not actually Dr. Doom himself. Jubilee taking a selfie with him was pretty freaking hilarious.

Of course, I’m not sure how Nancy thought this whole thing would go off without a hitch. Especially since as Maureen pointed out earlier, her daughter is prone to fighting first without asking questions, especially if with Dr. Doom. Doreen really needs to call in the squirrel army stat; timeline be damned!

The phone update from the future telling Dr. Doom how he takes over Earth starting in 1962 was pretty hilarious. It fits into the technology theme of this story and Doreen’s computer science degree. This book continue to fit into modern life in a way many superhero comics avoid. Dr. Doom outlawing Peter Parker being around spiders was pretty hilarious.

On a side note, for those not reading this in single issues, you are missing out on all the people who send photos in of their adorable Squirrel Girl cosplay. Like out-of-control cuteness.