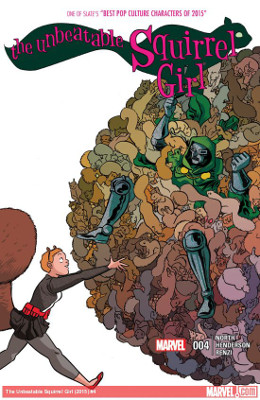 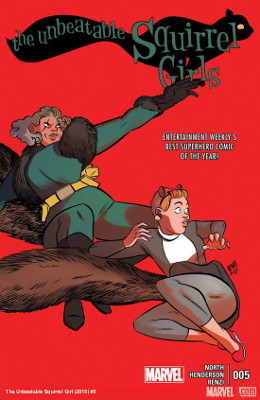 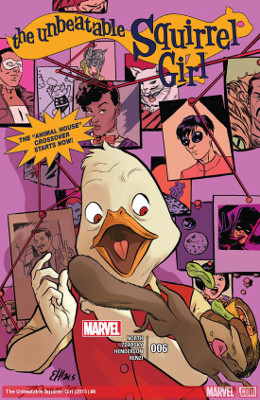 I’d rather like them to head back to the future already. And Doctor Doom just isn’t my favorite character. His Doombots made in the 60s are pretty funny though. The two-page Where’s Waldo spread was cute. I liked the Doomdog running away.

Mary is scary practical. She’s my kind of lady. And I love how distrusting of Doreen she actually is. Meanwhile, Doreen is all about going into the past to recruit dinosaurs in order to take Doom down.

I’m really loving that North decided to translate everything Tippy-Toe says. Especially since Doreen is really the only one who knows squirrel. Though I’m looking forward to the eventual adventure where Nancy must translate.

I will say that I’m mighty curious how Old Lady Squirrel Girl will do against Doom. Or more importantly how they’ll get this time thing sorted out.

Glad to have this plot wrapped up and Doreen and company all back at school and in their normal routines.

I suppose that defeating Doctor Doom by having Doreen go back and find herself a zillion times over is fitting. Last time she called on the squirrels to cover him, and this time, she covered him in Doreens.

Old Lady Squirrel Girl was hilarious. Especially since she was the “barely beatable Squirrel Girl” which just doesn’t rhyme as well. This issue redeemed a lot of the frustrations I had with the time travel plot by just having her. Especially since everything turned out to be Cody’s fault. And Doreen was the kooky old aunt!

I also really adored the part where Nancy decides the reason she remembered Doreen after she disappeared is because of the power of friendship. That is something I can get behind 100%. (Also, between her grades and the history adventures, we may see Nancy changing majors next quarter.)

Mary remains the best. Trying to steal the time ray gun and also having a moment where she doesn’t realize Doreen is Squirrel Girl. This, of course, brilliantly plays on all the other comics where characters should realize the real identity of the hero and seemingly are way too confused.

This crossover didn’t add a lot to the ‘verse, and I expected it to be funnier because there were two incredibly talented, very funny writers at the helm. Maybe Howard the Duck just isn’t my jam.

I did really love the moment where Nancy was like “I’m totally okay with you breaking the window in order to save Mew, because I would’ve done that too.” Because yes, the things that we’d do for our cats. They are very important.

Deadpool’s Super Villains cards continue to be amusing. Though I don’t think Howard the Duck is considered a villain. I thought it was funny that he was listed as being like a Mouse King (made of many ducks).

Kraven’s mutual respect for Doreen is cute. Shannon Sugarbaker is ridiculous, and I assume she’s related to the Sugarbakers from Designing Women. Or this is at least a shout-out to them. She is a bit 80s/early 90s in the design. Having her a cosplayer adds a layer of extra ridiculousness and being a hunter on top of that. Not unheard of, but yeah, ridiculous. And everyone she’s got locked up could certainly kick her butt.

I do hope Weapon II sticks around because seems like a superpowered squirrel would be helpful. Though Tippy-Toe might get really jealous.