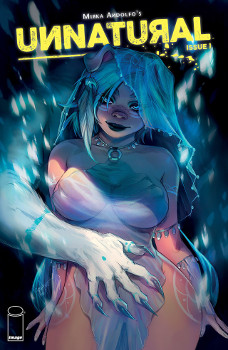 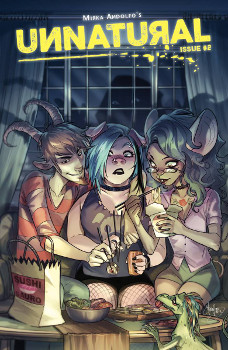 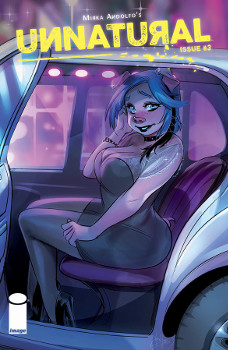 Andolfo’s Unnatural takes some big cultural commentary shortcuts. However, at the end of issue #1, I wanted to know enough about what happens next that I’ll be continuing with the series.

The two themes arising from issue one that give us greater cultural context are: fear of homosexuality and interracial relationships (steeped in othering) and fear of an ethno, fascist state controlling women’s reproductive rights. Of course, those two fears are incredibly linked as the latter uses the former to control those under its rule. Andolfo wrote this in 2016, one year after Italy’s last presidential election and during America’s campaigns.

We feel the fear Leslie has about the forced reproductive dating program. We feel, or understand, how Derek and Max are threatened by this society’s norms that are against homosexuality and interspecies (stand in for interracial) dating. We don’t need a ton of setup or exposition to understand the pressures and the terror. Though I do have to admit I was rather waiting for Leslie’s phone call from her parents asking about their future grandchildren.

The setup is interesting though. Issue #2 promises to take us on Leslie’s forced date, which means we’ll see close up what she’s afraid of. I would like to know what happens when people are discovered. Which does make me predict we’ll see Derek and Max found out, or where these people might escape to. There’s a big world out there, and there’s always been places where it was safer to be queer, where it was safer to be in an interracial relationship, even when those were outlawed in our society.

I am a little leery of the how the interspecies/interracial exchange will play out, but hopeful for the best.

Leslie may be sexy, but so is the mysterious wolf man. And Leslie’s sexy cuteness changes depending on the situation. In her sexy dreams, it’s erotically charged. In her times at home, she rocking mid-20s girly cuteness. (Which, in my opinion, at-home cuteness always wins my vote for the most sexy.) And when she’s at work, her commercialized sexiness has to do with her lecherous boss and what he hopes for the male gaze of his restaurant’s patrons. The latter is notably uncomfortable for Leslie, for her friend/coworker Derek, and notably for us, the readers.

I cannot image how Leslie’s sexiness would be portrayed by the average male artist. It certainly wouldn’t have the care and nuance that Andolfo takes.

On a completely different note, I hope we’ll see more of Leslie’s pet dragon Pif, who is just the cutest.

I felt so much anxiety for Leslie as she embarked on reporting to The Reproduction Center’s “Real Love” program. Andolfo does a great job at setting out the stakes, and how a world can seem so normal, but have real undertones of cruelty. This extreme of requiring anyone older than 25-years-old to find a mate of the opposite sex and same race — here the twist being of their own species, so for Leslie, another pig — for reproduction is harrowing.

I did feel it was very cliché for Leslie to have discovered her mother didn’t love her father, and that her parents were only together due to state requirements. And at the same time, see her mother engage in an affair with a lion man. Like, of course, Leslie is having hot dreams about other species, especially hot male predators.

Trish is such a good friend. I’m so happy to see a great female friendship. Especially given I was worried Trish might be a spy for the patriarchy, but not only does Trish listens to Leslie’s sexy dreams, she actually goes on a hunt for more information.

Andolfo’s panda sure looks odd. However, I guess, she’s a panda. I love that she’s obsessed with her tea.

You’d think our stalker would be a little more cautious around government buildings. The last panel does make me wonder more about the predator-prey roles in this society. What do they eat?

Besides that reveal at the end, this book seemed to have lost the plot thread. Let me attempt at an unpacking here:

First, Leslie goes on her date. The limo situation seems suspicious, but we kind of wave it off because Leslie is a regular person, not someone who calls a limo.

Next, she seems to be hitting it off with the rich, handsome, and smooth-talking Jones. Leslie’s a little smitten for him, but quickly realizes it’s all a facade. (Girl, have been there, and I feel you.) Then all of then sudden, everyone in the restaurant stops her from leaving and Jones is super pissed that she’s not falling for him. He mentions that they’ve infiltrated the mating program.

Leslie is knocked out, dragged somewhere else, kind of wakes up as she has some ritual performed over her, and then wakes up confused in her own bed.

The police knock on Leslie’s door. They tell her Trish is dead, and that Leslie never showed up for her government appointed date and was missing all last night. They believe she killed Trish. Leslie sobs on Derek’s shoulder.

The last we saw of Trish, a dying author was telling her about his book filled with interspecies love and how it’s all true. How there’s a “paradise” where everyone can love whomever they want, and it’s called Tijoux. But then he ominously says that when he came back from there, his life went to shit.

Trish just learned about it, and now she’s dead.