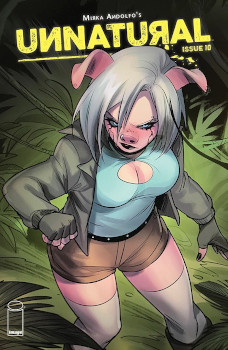 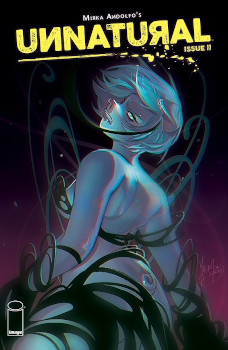 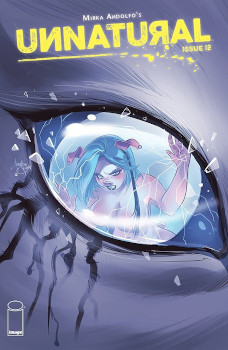 Except for telling Maxime’s backstory, Unnatural has been in a holding pattern for the last several issues, and frankly, it’s become boring as fuck.

Of course, the way that Andolfo breaks this holding pattern is by having Pif accidentally killed. This is the worst possible outcome, and Andolfo doesn’t seem to know how to pivot the plot without killing characters off. I’m sure Pif’s death is going to snap Leslie out of the Albino’s control due to how horrified she’ll be.

So Maxime’s entire story is defined by men. First, her husband beats her. Then, she falls in love with Winston, but he ghosts her and gets married. And finally, she runs into Napoleon, who saves her, and he leads her down the path to become Glance. If Maxime gets her way, a fourth man, the Albino, will take her over. Get your own story, Maxime!

While I’m okay with Leslie not being angry about Khal for accidentally killing Pif, I am still so upset that Pif is dead!

I also feel a great relief that there’s only one more issue in this series. That’s not what you’re supposed to feel when a series comes to an end.

But I guess Leslie is finally angry enough to conquer the Albino by overpowering him in her subconscious. We’ve taken care of that. I hope we at least have some magical spell or better closure.

Of course, because this book is poorly paced, we’re only getting one issue with Leslie and Maxime.

I do like Carol the best out of any of these characters. She breaks herself out, stops her own torture, and rescues Shea. Not to mention, Carol accidentally causes a riot amongst those students. The rebel team did need an army, and I guess they found one.

Awww. Love was what changed Carol. Unlike Maxime, who believes hardening her heart is how she can control her destiny and how she seeks power through oppression. On the other hand, Carol learns how everyone is more powerful together.

So, the entire point of this program was for the pigs to take over. That’s it. Andolfo’s metaphor about power here definitely applies to white supremacy and how it divides groups (like classes, or say tactics like colorism) apart when they should band together. Clumsy.

For how many times Leslie has been stabbed, she should be dead. Even if we count the Albino’s powers as making her more resilient in staying alive. Andolfo has not done an adequate job of keeping track of how injured the various characters have been and what the timeline looks like. They all make faster than normal recoveries from life-threatening injuries.

Maxime and Leslie’s showdown and ending with each other was entirely predictable. Of course, Khal tried not to let Leslie have the guilt over killing her mother. And of course, we find out that Winston left Maxime under threat from Napoleon and his people.

This world sure sorted itself too easily. Like the program shut down as quickly as it started, and while we see a little bit of the lasting cultural impacts with the mother telling her kid that Khal and Leslie’s love is unnatural, it’s all tied up with a bow. There’s no resolution, just Khal and Leslie in love and raising his sister with a Pip replacement.

Leslie’s only baggage seems to be that she doesn’t want her hair to be its natural blue color. We don’t even get any consensual sexiness between Khal and Leslie, which this book promised from the start.