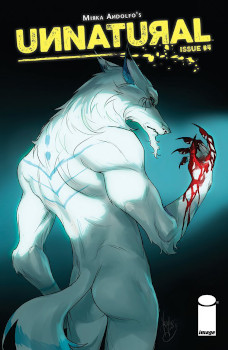 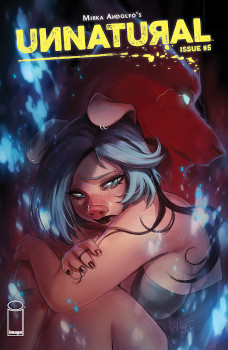 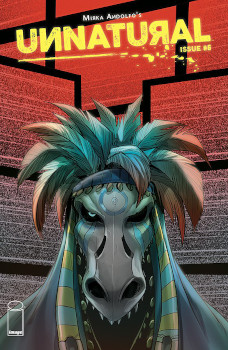 And Derek’s dead. This book is killing off characters like a George R. R. Martin book, and I am not feeling it at all. Just seems like a bunch of shocks for no reason.

Not sure what I think about this spell. There was a little reveal about how the old wolf was gobbling down pig wives, and Leslie’s ancestor killed him instead, which bonded their souls together or some shit.

This new wolf guy is a ninja, though we need some backstory on him. I’m not sure why these pigs decided to do what they did. Why would the pigs want to help a wolf ceremony? One that seems like it hurt their ancestors?

There are some details about this world that need to get further outlined. I don’t know. The pacing has been odd in the last couple of issues.

I wish this book would figure out what kind of tone it wants to have. We’re being bounced around, and now that we’re on the run, it’s yet another tone to solve this mystery. We didn’t even get to find out what Trish found that got her killed by Jones and his crew.

The pacing might’ve been a tad better if we had Carol introduced on not the last panel. But at least we got Khal’s entire backstory in one issue. Not sure how I felt that he didn’t share anything himself. Interesting to see how this wolf myth survived in the free culture, but in the other places, it’s died so much that Leslie has no idea.

Also, did this situation, and these dreams also happen to Leslie’s mom? Or how does this family curse exactly work? It seemed like Khal’s parents were “normal” wolves.

I assume Carol’s injuries were caused when she rescued Khal and his sister and by the other shaman who is the puppeteer behind Jones’ operation.

Leslie would probably be having more panic attacks, but they do need her a little focused on solving the problems happening. Poor Pif, he’s just barely hanging on. Maybe he can stay at the safe house as they go off on more adventures.

I’m somewhat worried we’re going to have another meaningless character death in the next issue, given how this issue has them on the run from the baddies and the sneak peek looks like death. The last couple of times we’ve confronted Jones, Glance, and company head-on, it’s ended in the deaths of characters. They need to get better at this fighting thing.

Of course, they will kill Leslie, if worse comes to worse.

I’m not sure how I think this spirit of the Albino plot is turning out. I’m not sure why he haunts Leslie’s subconscious and can possess her instead of Khal, his direct descendant. Of course, Khal can see and hear him. That has to creep Khal out, and it better explains some of his treatment and reactions to Leslie.

Will Pip be left behind to play with the other dragon in the vents?

The art for Bes’ story told by Carol was beautiful. I loved how Andolfo went out of her way to do something beautifully different and show off other artistic skills.