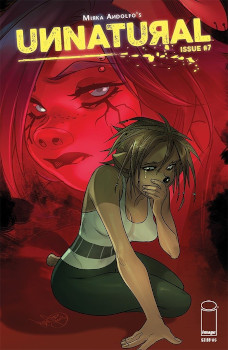 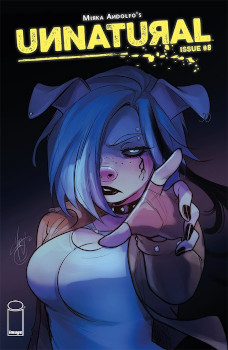 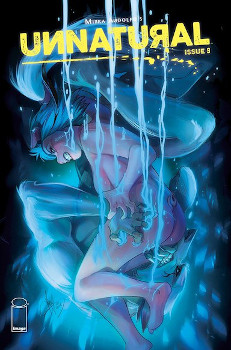 More running. This is probably the least interesting issue so far in the series.

We find out that Carol used to be part of the bad guys. What I don’t understand is how many generations have passed since these breeding programs were implemented. If Carol, Napoleon, and Glance created them, then this isn’t that old. The timelines do not make any sense. Maybe Carol only created these zappy brain implants.

I’m not sure Khal’s motivations though it’s pretty clear to me that a romance is supposed to develop between him and Leslie. Even as Leslie tries to rid herself of the Albino.

I want this book to do something besides have the characters on the run.

I guess we could’ve seen it coming that Leslie’s mother is the Glance and the one behind everything. Maybe the whole reason Leslie caught her having sex with a lion man was to try to get the Albino in herself. There’s a vast hole in Leslie’s relationship with her mother from that moment until now. What does she think her mother’s currently doing? Do they talk to each other? It seems like the entire fake date with Jones as a setup was overblown, considering her mom could’ve called her and got her to come over.

This direct approach could’ve saved us some time and all the running around the last couple of issues.

I don’t know why they trusted Kirk. There has been nobody they’ve encountered in this book that didn’t, in turn, try to kill them. Of course, him stabbing Khal was ironic since Khal is not the one with the white wolf spirit, Leslie is.

It’s unclear where this book goes now that Leslie lets the Albino take her over to save them. This is a tired trope and too common in these stories where the character gives into the ultimate and evil power inside them in situations full of danger.

I still don’t understand why her mom wasn’t like, “Hey daughter, let’s grab lunch” and then had this story proceed from there.

Okay, Leslie’s dad was abusing her mom Maxime — which Leslie never noticed, and her dad never abused her — and that’s in part why Maxime had an affair with Winston and then ran away. However, we still don’t know why Maxime joined this group or became Glance. It seems like she’d have some opposite direction away from these reproductive purity people. I wonder what happened to Winston.

However, trying to bring out the Albino doesn’t make any sense! Why do they want the Albino, who himself likes pigs, not wolves?! I mean, ultimately, this is all about power, but the power’s intention doesn’t seem aligned with their organizational goals.

Even if Leslie hadn’t seen Maxime since she was a child, a phone call still would’ve gotten Leslie coming to wherever her mother was. This connection is still a problem. It’s also hard to believe that her father wouldn’t have abused Leslie once his target of abuse left them. Or that Maxime wouldn’t have tried to bring her daughter with her.

The children in the reeducation place were pretty sad. This scene and the flashbacks to Maxime’s abuse felt more real than Leslie rolling with Albino in her mind.