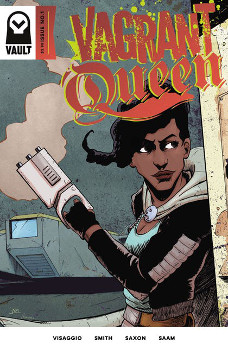 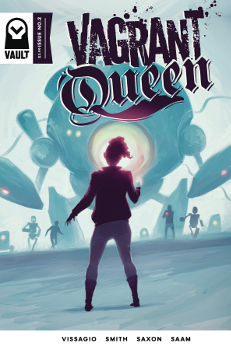 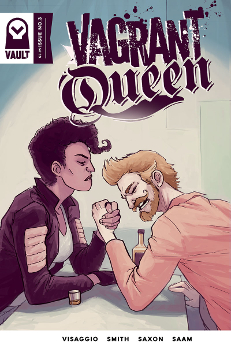 Visaggio plays to her strengths here. She knows how to create interesting worlds with just teasers for more, and how to create rough and tumble characters doing it their own way — everyone else, and perhaps themselves, be damned. And they do all this in space.

It’s a little Firefly, a little Doctor Who “The Beast Below,” and a little Star Wars. There’s a certain scrappiness about our heroes in all these shows that the Vagrant Queen, even in its title carries. Elida Al-Feyr and Issac both have the dare to live today for there may not be tomorrow attitudes.

Of course, the interesting threads are around Elida are her actually being royalty. (Which is why she reminds me of Doctor Who‘s Elizabeth X, not because they are both black women, and how she’s a bit scrappier of a Leia.) There is mythos around Elida due to her status, her missing mother, and the things she has done in her rogue element.

Smith’s illustrations were sharp. There’s a lot of cheekbones. He also draws a messy world, a real world where there’s trash, shady people, and nothing is cleaned up and tidy. Except of course those admiralty troops.

Vado and his chicken-person body guard were pretty funny. Especially when we later learn he’s actually a mob-type boss around this station. It definitely hits the Star Wars ridiculousness of Jabba the Hut; who’s scary, but also a giant slug.

We seem to still be finding our footing in this book and in this universe. I’m not quite sure why we need to have the current government on the tail of Elida. They could’ve broken into forbidden space without all the firefights.

There are also a lot of characters in this book. At issue two, I’m still trying to figure out which ones I should care about — besides Elida and Issac, obviously — and which ones to forget their names. Or will say Vado come back around like Jabba does in Star Wars.

I kind of love Issac being Canadian. Which seems even more like he’s supposed to be Nathan Fillion, or an even more reckless version of a Fillion character. Even with the stupid mustache.

I did not need to see Lazaro staring at his first-in-command’s ass to know that he’s a creep-o. Even if the admiralty was going to yell at him. It’s always ridiculous to see royal rule go to military rule as they aren’t any better!

I very much want to know what’s in the guarded and untouchable space. Seems like Elida should’ve had some family myths or secrets about it she’d heard as a kid. But she appears to be in the dark. Even if Issac so is not. Which I love her pointing that out.

I wanted to see more of an emotional connection between Issac and Elida. Why are they hurt so much by each other’s betrayals? Instead, the story felt emotionally flat for me. Like we were going through the emotions to end up with Issac having a flimsy excuse to be working for Lazaro.

I get money, but Lazaro is the worst.

We didn’t learn much of anything about this forbidden space they broke into, or the wheres/whats of Elida’s mother.

Instead, we learn that Issac has a wife named Hannah, who he’s both desperate and not at all interested in being reunited with. He likes Canadian whiskey, a lot. The real stuff. And he and Elida have been keeping secrets and selling each other out for a while.

Smith’s art remains fun. He’s particularly adept at how the characters move through the panels during fight scenes. Which is a great boon to this book where there’s a lot of punching and shooting. Saxon also uses color here to tell the story of time, and I found it very effective.